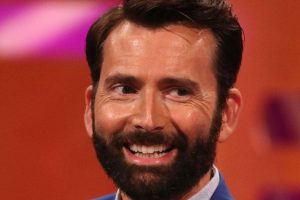 David Tennant's son Wilfred is poised to follow in his dad's footsteps with an illustrious career in film and television, as he has made his acting debut in long-running hospital soap Casualty at just nine years old.

The youngster appeared on-screen as an anxious little boy desperate for the doctors to help his pet gerbil.

Wearing his blonde hair loose and wavy, the little boy donned a cream ribbed cardigan and glasses as he stole the scene from two of the BBC show's permanent cast members.

Wandering into the Holby City hospital clutching a box in his arms, Wilfred took his role as character Joey Parker very seriously, speaking to the doctors about his ill and beloved pet Rory.

During the scene, the boy was seen walking through the double doors and announcing: "I need a doctor, he's not moving!"

Sadly, the doctors quickly realised Joey's gerbil had already died, and they struggled to find a way to break the news to him during the episode.

After managing to track down the boy's parents, the doctors couldn't bear to break his heart with the truth, instead deciding to send someone to the local pet shop to buy a replacement gerbil.

Joey's dad was relieved with the decision, and thanked the doctors for their caring and kind nature to his son.

The young actor isn't the first of the family to join the cast, as his mum Georgia also took on a role back in 2007.

Proud mum Georgia, 37, retweeted a post on Twitter from her little boy's agent Sarah Camlett, as she shared excitement for the future.

"So proud of this glorious young person's TV debut," the agent wrote. "The Future Is Bright. #WilfredTennant."

There was also a snap of the youngster's name in the drama's credits.

Doctor Who star David, 51, shares five children in total with his wife.

The actor adopted her eldest son Ty, and they went on to have daughters Olive, 10, Doris, six, and Birdie, two, as well as son Wilfred.

Georgia had a major role on Casualty as doctor Heather Whitefield in 2009, but the character unfortunately met a grisly end when she ended up trapped in a lift shaft months later.

Ty's first TV appearance came playing teenager Aaron, who was rushed to hospital on his birthday following a seizure.