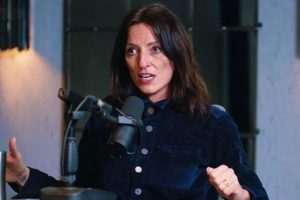 Davina McCall has opened up about taking cocaine with her mum when she was just a teenager.

The 55 year old has won legions of fans thanks to both her stellar presenting and candid honesty about topics including everything from addiction to menopause.

In her latest interview, the 55 year old TV presenter, who currently features on the panel for The Masked Singer, told Steven Bartlett about one particularly alarming incident.

Davina explained that her late mum Florence once told her that she was "going on holiday" to France when she had actually lost custody of her child.

Davina's grandmother and father were given custody of her, and the star told Steven the whole saga left her with a "fear of abandonment" and making "really stupid decisions all through my teenage years".

Davina explained that she would visit her mum – which is where the drug raking together took place.

She said: "When I say I'm half-nun, half-wild-child, it's because of that life that I've had."

"I'd get back to the UK and it would be back into your secondhand clothes and sort of safe small life. Simple, my life was very simple."

Davina came to believe that "my life in Paris and my life in the UK must never know about each other", for fear that the rest of her family would pull the plug on her European trips.

Her older sister Caroline Baday, who sadly passed away in 2012, was Davina's "lifeline" during these chaotic times, with the star also explained that even though her experiences in France would occasionally take a crazy turn, she'd "dine out" on the affection she received while over there.

Through tears, Davina told Steven that she was eventually able to forgive her mum and the pair even patched things up when Davina gave her an ultimatum to get sober.

Before her death, a drug-free Florence attended her famous daughter's wedding, but things broke down once again when she sold a story to the media regarding their relationship.

Wrapping things up, Davina concluded by suggesting Florence's death freed her up to remember the better times they'd spent together instead of the difficulties.

After her tumultuous teenage years, Davina went on to struggle with drug addiction but has now been clean for over 20 years.