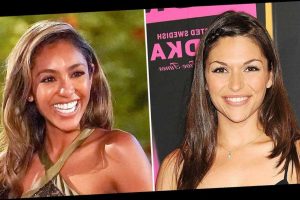 It’s not official until you’re in the group chat. DeAnna Pappas told Us Weekly exclusively that Tayshia Adams was added to the ongoing text chain with the former Bachelorettes on Tuesday, November 10 — the same day her first episode aired.

“Rachel [Lindsay] added Tayshia to our group chat, so we all were cheering her on and just saying, like, we couldn’t wait to watch her and [are] super excited to add her to the group of ladies, you know, and just hoping that this goes really well for her,” the season 4 Bachelorette, 38, dished on Us Weekly’s “Here For the Right Reasons” podcast. (All 17 leading ladies are on the text chain, including season 2 and 3 Bachelorettes Jen Schefft and Meredith Phillips, respectively, whom DeAnna told Us they just tracked down in June.)

Tayshia, 30, took over for Clare Crawley on Tuesday’s episode after the 39-year-old hairstylist got engaged to Dale Moss after less than two weeks of filming. According to DeAnna, Clare and Dale, 32, are happier than ever, but the backlash from Bachelor Nation over the season has been tough for the OG season 16 lead.

Bachelor Nation Stars Who Found Love After the Show

“We sent her some flowers and stuff because it’s been a really difficult road for her. There is so much hate and negativity online and social media for her and that just like breaks my heart,” DeAnna told Us. “We went [from] months ago, like, rooting this girl on, like, ‘Yeah, this 39-year-old, strong, independent woman who knows what she wants!’ And then the second she takes what she wants, everybody’s like, ‘Oh, she’s the worst. She doesn’t give anybody a chance. She’s a bitch. She’s all these things’. I’m like, ‘Wow.’”

As one of the only people who knew Clare and Dale secretly got engaged and left the show during the summer, DeAnna told Us that the Bachelor Winter Games alum has been confiding in her.

“[This should have been] a time in her life that was most joyful and that she was super excited about and she was pretty much like, ‘I’m deleting my Instagram, I can’t watch the show, I can’t handle the things that people are saying about me.’ And that’s wrong,” she told Us. “Social media robbed the joy from what this should be for her.”

Celebrities Who Have Been Asked to Be the Bachelor or Bachelorette

DeAnna, who shares daughter Addison, 6, and son Austin, 4, with husband Stephen Stagliano, added that after the hate she’s seen online during season 16, she wouldn’t want her kids on the show in the future.

“I cannot even fathom putting [Addison] on reality television,” she told Us. “She’s so sweet. She’s so innocent. She is so kind, you know, and she’s so thoughtful and so inclusive, like, I would never want her to experience exactly what Clare has gone through that social media hate.”