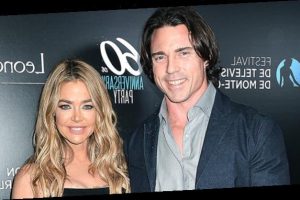 Denise Richards and Aaron Phypers went on a hefty grocery run on July 2, as seen in a new photo she shared of her husband with a full cart of groceries. The outing came just days after she put up a united front with Aaron while addressing affair rumors.

Denise Richards isn’t shying away from the public eye, despite ongoing rumors of her alleged affair with Brandi Glanville. The The Bold and the Beautiful actress, 49, and husband Aaron Phypers hit up the grocery store just days after she appeared on the The Talk and addressed rumors about her marriage. Talk about a busy week.

The Real Housewives of Beverly Hills star snapped a photo of her husband pushing an overstocked cart, which included chips, pretzels, cereal and more tasty treats. “We just stopped to get me half n half for my coffee tomorrow,” Denise wrote in the caption of her Instagram post. Only Aaron, who was wearing a mask, was in the frame.

Many fans in the comments teased that Denise had “a ton of snacks” in the couple’s grocery cart. Why? — Brandi wrote “#snack on this” as her caption when she tweeted an apparent photo of her and Denise kissing on June 27.

Denise finally addressed the ongoing rumors that she slept with Brandi during a virtual appearance on The Talk on June 30. “I love for things to play out on television instead of social media, but the stuff that’s been out there, I have been through it in the media with different claims being made,” Denise said. “So for me, personally, this is like kindergarten. I’m, like, ‘Well, whatever, we’ll just let it play out on the show.’ It is what it is.”

“People are always going to say stuff, and I know my truth, my husband does — it is what it is,” she added. “I’ve had so much stuff said over the years about me and my family, and this is like nothing compared to some of the things that have been said.”

Denise previously denied the affair rumors through her representative. The alleged affair reportedly occurred sometime in 2019 while filming Season 10 of RHOBH. It was confirmed during the Season 10 premiere that Denise stopped filming with the cast in December 2019 — after her rumored “months-long affair” with Brandi was revealed in the press during a cast trip to Rome, per DailyMail.

Brandi is slated to make her triumphant return to The Real Housewives of Beverly Hills when the show returns in July. She’ll make various appearances in a guest role. In the explosive teaser for for the latter half of Season, 10, Brandi alleges: “I f–ked her, woke up the next morning [and] she said, ‘Aaron can never know this. He’ll kill me.’” In the scene, Brandi is telling her claim to Kyle Richards, Dorit Kemsley, Teddi Mellencamp Arroyave, Lisa Rinnaand Erika Girardi at a dinner, where Denise is not present.

The women, who are in shock over Brandi’s words, later confront Denise about the alleged affair at a separate outing, and things don’t go over well. “What the f–k?” Denise says through tears, noting that “this is very bad.”

“That is not true!” Denise says in the teaser. At one point Dorit tells the group that she believes Denise.

The Real Housewives of Beverly Hills returns July 8, at 9 PM ET on Bravo.