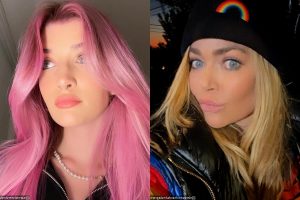 The ‘Real Housewives of Beverly Hills’ alum claims that her 18-year-old daughter, whom she shares with Charlie Sheen, made some promises to her about what contents she would share on the subscription-based platform.

AceShowbiz –Denise Richards and her daughter Sami Sheen had a deep conversation before the latter joined OnlyFans. In a new interview, “The Real Housewives of Beverly Hills” alum claimed that the 18-year-old made some promises to her about what contents she would share on the subscription-based platform.

“I had heard of OnlyFans. I had never been on there, so I didn’t even know really what it was,” the actress recalled in the Thursday, September 1 episode of SiriusXM’s “Jeff Lewis Live”. “But I heard obviously a lot of different things.”

However, Sami, whom she shares with ex-husband Charlie Sheen, allegedly reassured her mom that she wouldn’t be going too far with her contents. “And she reassured me that she was going to keep it very tasteful to mainly, like, bikini stuff, bathing suit and stuff like that,” Denise shared.

Denise also talked about her decision to join the platform after Sami received so much backlash over her OnlyFans venture. “The reason why I wanted to join was because she got so much backlash for that that I didn’t think it was really fair,” the 51-year-old TV personality explained.

“And I’ve done things in my career-you know, I’ve done Playboy, and I was in ‘Wild Things’, and I’ve done sexy shoots before promoting movies and stuff like that. And sometimes people say negative things-well, a lot of times they do, and a lot of times they don’t,” she elaborated. “But I thought, this is not fair that she would be getting so much backlash when a lot of people post stuff like that on Instagram. Not to take it as far as you can take it on OnlyFans, obviously. But still, I just felt that it was not really fair for her to get that kind of backlash.”

As for Denise’s contents, she revealed, “I do bikini, I do lingerie. I do stuff that is sexier because I also think, why not if I’m able to and be able to do something that’s also outside of some of the more conservative stuff that I post on my Instagram.” She added, “I do show my boobies, my tush. They’re already out there if you Google them.”

Despite criticism, Denise has been supportive of Sami over her decision to join the adult platform. Sami’s father, however, was against the decision. “I do not condone this, but since I’m unable to prevent it, I urged her to keep it classy, creative and not sacrifice her integrity,” the “Two and a Half Men” alum said back in June. Seemingly blaming Denise, he added, “She is 18 years old now and living with her mother. This did not occur under my roof.”

Charlie then apparently changed his mind after his ex “has illuminated a variety of salient points, that in my haste, I overlooked and dismissed.” Focusing on supporting their daughter, Charlie added, “Now more than ever, it’s essential that Sami have a united parental front to rely upon, as she embarks on this new adventure. From this moment forward, she’ll have it abundantly.” However, Sami most recently said that her “dad hasn’t seen the light yet.”