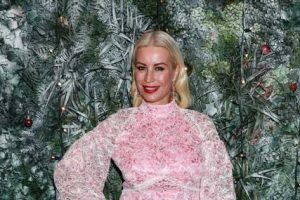 Denise Van Outen shared an adorable snap with her 11 year old daughter Betsy as she focuses on moving on from her ex-fiancé Eddie Boxshall.

The 47 year old star posted the image on her Instagram stories as she embarked on a crisp January walk on Tuesday.

Denise, who has regularly appeared on Celebrity Gogglebox and appeared on Steph's Packed Lunch to discuss her previous dating history Monday, January 10, wrapped her arm around her pre-teen daughter in the glorious winter sunshine.

The former Big Breakfast presenter wore a pair of plain black leggings and a white puff jacket for the outing, bringing one of their French Bulldog pooches along for the journey.

Betsy wore similar clothing to her mum, opting for a striped T-shirt and black jacket instead, as both chose trainers for the country paths.

Denise and her daughter also donned matching black beanies for the trip.

The star wrote her daughter’s name alongside a red heart emoji at the bottom of the sweet image.

It comes after Denise confirmed she and former partner Eddie, 47, are "no longer a couple" through a statement on her Instagram following claims she had called it quits on their seven-year relationship after allegedly discovering secret messages he’d sent to other women on his phone.

Alongside a black and white photo of herself walking her two dogs Tilly and Remy on the beach, Denise began: "Over the past couple of months, there has been much speculation regarding my relationship with Eddie.

"It saddens me to confirm that we are no longer a couple.

I had to make the difficult decision not to continue in our relationship.”

"I will always treasure the good times we spent together, and the memories made,” the star continued.

"We ask that you please respect our privacy at this time, especially for our children,” Denise added.

Following reports of Eddie’s infidelity, a source told The Sun at the time: "Denise is both ­furiously angry and utterly heartbroken. It’s the very last thing she expected to happen after she had been so happy with Eddie.

"She thought this was for ever. But while she has been out at work he’s been sat in her home betraying her trust."

For all your latest updates on Denise Van Outen, sign up to OK!'s daily newsletter.