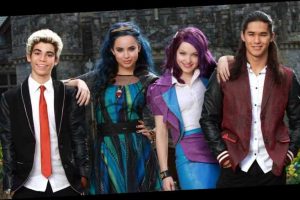 It has been exactly FIVE years since the first Descendants movie premiered on Disney Channel on July 31, 2015.

Here’s a synopsis: Driven by exciting music and performance, the story is set in the idyllic kingdom of Auradon where Ben, the benevolent teenaged son of the King and Queen (Beast and Belle from Beauty and the Beast), is poised to take the throne. His first proclamation: offer a chance at redemption to Mal, Evie, Carlos and Jay, the trouble-making offspring of Maleficent, the Evil Queen, Cruella de Vil and Jafar, who have been imprisoned on the forbidden Isle of the Lost for 20 years.

These villainous descendants are allowed into Auradon for the first time to attend prep school alongside the teenage progeny of Fairy Godmother, Cinderella, Sleeping Beauty and Mulan. Only time will tell if these evil teens follow in the footsteps of their wicked parents!

Check out the gallery for a ton of photos from the first Descendants movie!

END_OF_DOCUMENT_TOKEN_TO_BE_REPLACED

END_OF_DOCUMENT_TOKEN_TO_BE_REPLACED
We and our partners use cookies on this site to improve our service, perform analytics, personalize advertising, measure advertising performance, and remember website preferences.Ok