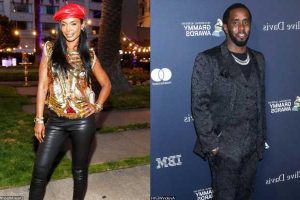 The hip-hop mogul has been making use of his social media account to honor his late ex-girlfriend, who died in November 2018 due to lobar pneumonia, in any way possible.

AceShowbiz -Sean “P. Diddy” Combs always remembers Kim Porter. On Thursday, December 15, the hip-hop mogul took to his Instagram account to share a loving tribute on what would have been his ex’s 51st birthday.

Some of Diddy’s famous friends reacted to his post with one coming from Ludacris, who left a crown emoji in the comment section. Nicki Minaj also reacted to the sweet post with a heart emoji.

One fan even wrote a lengthy birthday message in the comment. “Life & time is momentary. Don’t be eluded by those two Give love and time in abundance while your loved ones are here . Don’t waste time chasing worldliness, cherish the moments so You’ll have no regrets when life ends ,” it read. “Happy Heavenly Birthday Kim . Your spirit lives within your children . Sean , you’ll see her again .”

Diddy has been making use of his social media account to honor his late ex-girlfriend in any way possible. Back in April 2020, Diddy even revealed during a joint Instagram Live with Fat Joe that he built a monument, which is a woman’s curved statue, to honor Kim in his home. At one point in the Live, the “I’ll Be Missing You” rapper shared a message to people who love to change partners quickly.

“To all the playboys,” he said. “When you find that one, don’t be playin’ around with it. ‘Cause they’re rare. Y’know what I’m sayin’? It’s rare. Somebody that’s gonna understand you, be there for you unconditionally.”

The musician then admitted to regretting some of his life choices as saying, “I feel like she was the one for me, and you know, I played around. [God] changed me as a man and be able to appreciate love.”

Kim passed away tragically in November 2018 due to lobar pneumonia. Kim and Diddy dated from 1994 to 2007 and shared three kids together, son “King” Christian Combs and twin daughters Jessie James and D’Lila.