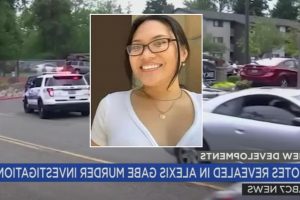 Clues to the location of a missing California woman may be found in a note left behind by her ex-boyfriend.

24-year-old Alexis Gabe was last seen on January 26 in Antioch, California and investigators believe her disappearance may be at the hands of her ex-boyfriend Marshall Curtis Jones. While no body has been found as of yet, authorities believe she is dead, particularly in light of the recent handwritten note that was found crumpled up in a garbage can at Marshall’s sister’s house. The note contained detailed directions to Pioneer, a location some 60 miles East of Sacramento, and officials believe they are the directions to where Marshall disposed of Alexis’ body.

Alexis’ father Gwyn Gabe explained to ABC7: “as soon as police saw that, they left and went straight to Pioneer.”

“His phone was there. It pinged around that area. We thought it was something to throw police off.”

However, police officers shot and killed Marshall on June 1 during an attempt to arrest him in Seattle, Washington after he allegedly lunged at them with a knife, as explained in a police report:

There goes any hope of a confession…

Later, a friend of Marshall’s came forward to police explaining that he reached out and was “thinking about killing Alexis and wanted to know where the best place to hide a body would be.”

And that wasn’t a red flag?! According to a report released to Alexis’s parents, Sergeant James Stenger explained the friend believed Marshall was just joking, and the two agreed the best place to hide a body would be in a septic tank or buried in a forest.

Related: California Mom Arrested After 7-Year-Old Daughter Falls Out Of Car On Freeway

As of now, police strongly believe Alexis’ body is in the Pioneer area, especially after their May discovery of Alexis’ phone case, which the FBI were able to confirm as containing Marshall’s DNA.

Gwyn explained detectives and volunteers alike have searched over 200 miles of land and drained over 8 million gallons of water from a pond in the area, but “unfortunately, they found nothing.” He continued that him and his wife Rowena believe Alexis could potentially still be alive, adding:

“Until we find a body, we’re just going to keep believing that she’s still alive.”