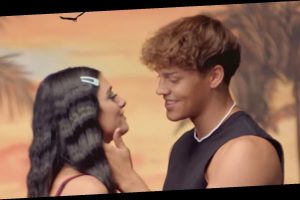 Dixie D’Amelio and Noah Beck share another smooch in a music video for Jamie Lynn Spears‘ new video for the re-imagined theme song “Follow Me (Zoey 101)”!

Also starring in the video are a crop of today’s young stars including JoJo Siwa, Loren Gray, Gigi Gorgeous, Eva Gutowski, Harry Jowsey, Sofia Reyes, and of course Chantel Jeffries, who produced the track and helped it come to life.

Unfortunately, Victoria Justice wasn’t able to be apart of the video, but she did get a little shoutout!

Jamie Lynn just opened up on On Air with Ryan Seacrest about the Zoey 101 reboot and how the music video came about.

“2020 was a crazy year. We’d been focusing on the reboot and giving it to the fans, at the beginning of the year,” she told Ryan Seacrest. Then with everything that happened, we were like, well, let’s figure out a way that we can safely give them something. We figured, why don’t we give them a song, give them something to finish 2020 out on a better note, and look forward to the reboot in 2021.”

I think that we’re just kind of taking a lemon and making lemonade, and have fun with, and just engage with the fans. Really, that was the main intent of the whole idea,” Jamie Lynn added.

END_OF_DOCUMENT_TOKEN_TO_BE_REPLACED

END_OF_DOCUMENT_TOKEN_TO_BE_REPLACED
We and our partners use cookies on this site to improve our service, perform analytics, personalize advertising, measure advertising performance, and remember website preferences.Ok