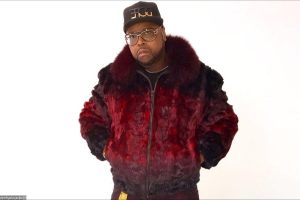 Denying that Kay was put on a ventilator, Kwame Grayson explains that the 55-year-old Rolling 110 Deep artist was put on a ‘machine that was helping him breathe.’

AceShowbiz –DJ Kay Slay’s brother is giving fans updates on the former’s current condition amid his COVID-19 battle. In a new interview with HipHopDX, Kwame Grayson claimed that the DJ is in a “recovery state.”

Kwame said he and his family were “freaking out” when Kay’s condition got worse. Kwame added, “We’re his little brothers biologically. We look just like him. He does his thing, we do our thing. But he knows how we feel about him. I was talking to him before he was in the state that he was in a couple days ago – this is when he was on Instagram writing everybody back – I’m in the DM and I’m propping him up like, ‘You gotta get out of there, man. The world needs you and stuff.’ “

“So we’re writing each other back and I already told him once he gets better, we’re gonna come give him a hug. But he’s definitely not gonna die,” Kwame continued. He then clarified that some social media posts about Kay’s illness were “definitely inaccurate. It was not true. He’s gonna live. He’s just in a recovery state right now.”

“I thought he wasn’t going to make it. He couldn’t even talk. But he was slowly fading out, but God is good. He’s not going to die,” Kwame further stressed. “They’re going to move him to a private hospital, hopefully a joint where everybody can come visit him. But he’s not gonna die. That’s not in the cards. He’s in a recovery state. He’s getting stronger. He’s gonna be alright.”

This arrived after Wack asked his Instagram followers to pray for Kay. “Pray for my brotha @djkayslay It’s not looking good. He might be mad at me for this those that know Slay but he needs all the support he can get … Been 14 days fighting Covid and he’s just be put on a ventilator . Keep him in your prayers Please,” he wrote.