Home » DJ Khaled Reveals Justin Bieber & Justin Timberlake Will be Featured on His Next Album!

DJ Khaled Reveals Justin Bieber & Justin Timberlake Will be Featured on His Next Album! 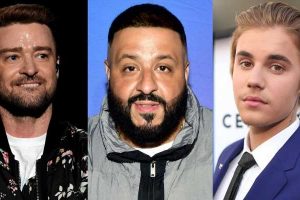 DJ Khaled is sharing new details on his next album!

The 45-year-old Grammy-winning DJ took to his Instagram on Friday (April 23) to reveal that Justin Bieber and Justin Timberlake will be featured on his upcoming album Khaled Khaled.

“#FANLUV I’m so stressed out in a good way mixing and mastering this album I missed the legendary FaceTime of the ICONS @justinbieber and @justintimberlake 🤦‍♂️🤦‍♂️” Khaled wrote along with a screenshot of the two Justins trying to FaceTime him while in a studio together.

“My brothers I’m gonna call you back! I’m mixing BOTH of y’all’s VOCALS! 🔑 @justinbieber I just got done with the mix a few days ago get ready for mastering!” Khaled continued. “And @justintimberlake I just sent the record we did together off to mix. My brothers I will call you RIGHT BACK! I’m in ALBUM MODE !!!! #99% DONE KHALED KHALED THE ALBUM COMING.”

As of right now, Khaled‘s new album doesn’t have a release date yet.

If you missed it, DJ Khaled and this rapper launched a joint OnlyFans account!