Home » Celebrities » Do Any ‘Love, Simon’ Characters Appear In ‘Love, Victor’ Series? Find Out All We Know!

Do Any ‘Love, Simon’ Characters Appear In ‘Love, Victor’ Series? Find Out All We Know! 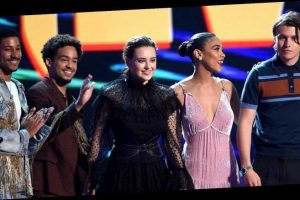 The Love, Victor trailer was just revealed earlier this week, and we got a quick glimpse at Keiynan Lonsdale, who plays Bram in the original movie Love, Simon.

Other than Keiynan, no other original characters from the movie could be seen, but that doesn’t mean we won’t get to see them in the series.

It has also been previously reported that Simon himself, Nick Robinson, is serving as an Executive Producer on the show, and that he’s narrating as well. Here’s hoping for maybe a cameo??

Love, Victor is of course a spinoff of Love, Simon, which is set at the same high school. It follows Victor (Michael Cimino), a new student at Creekwood High School on his own journey of self-discovery, facing challenges at home, adjusting to a new city and exploring his sexual orientation.

When it all seems too much, he reaches out to Simon to help him navigate the ups and downs of high school.

Tune in to the premiere of Love, Victor on Friday, June 19th on Hulu!