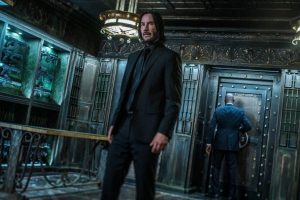 Keanu Reeves has been in several martial arts films. In The Matrix, he downloaded Kung Fu into his brain. In Man of Tai Chi, he ran a martial arts tournament and got his hands dirty in the end. John Wick is a practitioner of seemingly every style of fighting. So does Reeves really know martial arts?

Reeves set the record straight on the Sept. 29, 2019 episode of the Conversations with Charlie podcast. Host Charlie Herzfeld asked Reeves if he practiced and Reeves explained his martial arts background.

On screen, all of Reeves’ characters look like they could take down the biggest opponent. That’s all movie magic, says Reeves.

“I have no martial arts background,” Reeves said. “I think I had one Aikido class or something. So I only know movie Kung Fu. Really the first action was with Kathryn Bigeow on Point Break. That’s the first time I got to do an ‘action’ movie and go through the training and work with LAPD SWAT, start working with the weapons, weapon manipulations and fake fights which are a lot of fun. Then it was Speed.

Where did Keanu Reeves get his Kung Fu training?

In The Matrix, Neo (Reeves) says, “I know Kung Fu” and immediately spars with Morpheus (Laurence Fishburne) in a training simulation. To perform that and the film’s other martial arts battles, Reeves and Fishburne trained for months.

“So with the Wachowskis on The Matrix, that was like okay, so I love the project, love you,” Reeves said. “Then they were like, ‘Oh, by the way, you have to train for four months.’ And I was like, ‘Cool, let’s do that.’ That’s where I met Yuen Wu-Ping who’s a famous director and action choreographer, director out of Hong Kong.”

Reeves’ continued to develop his “movie Kung Fu” skills over the years and many films. Each Matrix sequel got harder, and John Wick displayed new prowesses in each film. Still, Reeves said none o this training applies to practicing martial arts in real life.

Wu Ping worked with me graciously for Man of Tai Chi and it was cool having done three films with him and having watched how he directed, so where do you put the camera in a fight scene and how do you get different stories? Then working with the Wachowskis, storytelling in action, connecting that really together. Character, what’s your character’s journey in this? Going into John Wick, so yeah, just the practical okay, you’re going to train for a film in terms of weapons or the fighting styles. The tree is basically Point Break, Speed, Matrix, John Wick.