Dolly Parton Reveals the Secret to Her Small Waist 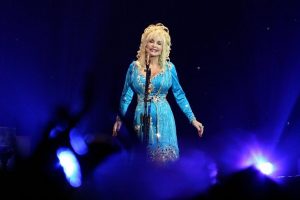 Dolly Parton always dazzles fans with her sparkling, colorful outfits and big hair. Another feature she is famous for is her tiny waist. How does Parton stay in shape? Here’s what the country music star once shared about the secret to keeping her waist trim.

Parton wasn’t always praised for her unique look. Early in her career, she was criticized for wearing flashy outfits and a lot of makeup. During a 1977 interview with Barbara Walters, the country singer defended herself when asked why she wore such “extreme” clothes. However, Parton’s fashion has become part of who she is as an entertainer.

Parton is open about her quest for the right look. She admits to having plastic surgery so she can maintain her face and body. “If something is bagging, sagging, or dragging, I’ll tuck it, suck it, or pluck it,” she famously told The Guardian.

How does Parton get such a tiny waist? The “9 to 5” singer revealed her secret. She tells The Guardian she eats a low-carb diet during the week. On the weekend, Parton allows herself to eat whatever she’s craving at the moment. However, she’s careful not to overindulge because of her height.

“I do have to watch it because I’m only about 5 feet, and you can’t hold on to too much weight when you’re so short,” she says in her interview with The Guardian. “So, I stay on a low-carb diet pretty much through the week and eat what I want on weekends. And of course, nothing matters on Thanksgiving and Christmas!”

One person who doesn’t seem to mind how Parton looks is her husband, Carl Dean. During a 1981 interview with Ladies’ Home Journal, Parton discusses her relationship with her husband. She reveals that Dean likes to buy her “sexy underwear.” She says he likes her best when she wears hot pants. “Carl also buys me sexy underwear, and for some reason, he loves me in hot pants, especially when I lose weight,” says Parton. “He’ll say, now go put on them hot pants.”

Parton also spoke to The Guardian about her life and music. The interviewer asked the singer if she gets dolled up even when she’s at home with her husband. Parton says she does pay attention to her appearance, even if it’s just her and her husband.

“I don’t want to look good for everyone else and like a slouch for him!” declared Parton. “So even if we’re just driving around in our RV camper and hitting all the local fast-food joints, I’ll tease my hair and put it up in a little scrunchie.”