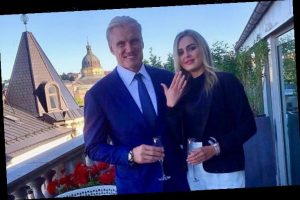 The ‘Rocky IV’ actor has popped the big question to his personal trainer-turned-girlfriend roughly six months after they went public with their romance.

The Scandinavian star revealed on Instagram he proposed to Emma, who’s in her 20s, a week ago in Stockholm – before the couple returned to Los Angeles where they both live and were spotted out and about this Friday, June 26, 2020.

Alongside a snap of his fiancee flashing her pink engagement ring as the pair posed on a balcony, he penned, “Something very special happened here in Sweden.”

The message was liked by the star’s former director and co-star, Sylvester Stallone.

Emma also posted her own Instagram album of the occasion, including a close-up of her glittering pink ring. She captioned the gallery, “Pinch me.”

The couple went public with their relationship in January, with an insider telling the New York Post’s gossip column Page Six the romance was months old.