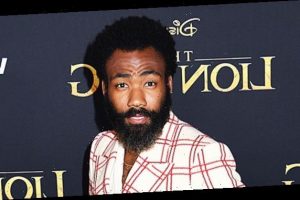 Surprise! Donald Glover quietly welcomed his third child during quarantine with his partner Michelle White. In a new interview, the actor explained the heartfelt meaning behind his son’s name and it’s truly touching.

Donald Glover is a third-time dad! The Atlanta creator, 37, welcomed a son named Donald during the ongoing COVID-19 pandemic, he revealed in an interview with GQ. The actor — who shares two other sons with his partner Michelle White — said they named their third child after his late father, Donald Glover Sr., who passed away in 2018.

“You know, I had [a kid] during the coronavirus,” he told actress Michaela Coel in the article, which centered around a conversation between the pair. Donald explained that the birth of his son came amid the nationwide protests over the death of George Floyd — an unarmed Black man who died at the hands of police in Minneapolis in May. “Yeah, it was nuts. I was in the hospital bed,” he recalled. “My son had just been born, like, an hour before and I was watching the George Floyd video. It was such a weird moment.”

Donald went on to explain why he decided to name his son after his late father. “It was such an intense, weird moment, because I’m watching that video and it’s like eight minutes long, so you’re sitting there and I had just had this amazing, joyful, expanding moment, plus my dad had passed away recently, so [my son] was named after my father,” he explained. “I don’t even know what, really, the word is to describe it. It was just expanding: the empathy and compassion and the terror and the joy of it.”

Elsewhere in the interview, the Solo: A Star Wars Story actor spoke about potentially getting a vasectomy. When Michaela, 33, said that she’s freezing her eggs, he replied, “That’s great. I feel like it’s gonna become more and more [common]. Because I’ve actually had that thing where I’m like, ‘Maybe I should just get a vasectomy and just freeze those assets.’”

He continued, “Because adopting kids, my family adopting kids … And we actually have been talking about [it], because we have three boys so I’m like, ‘Oh, it might be nice to be get a girl in there.’ So I think all those are great options,” he said, adding, “But it is hard.”

Donald and Michelle welcomed their second son, Drake, in 2018. Their first-born son, Legend, arrived in 2016. The actor is known to keep his family life private. — Congratulations on their newest addition!

END_OF_DOCUMENT_TOKEN_TO_BE_REPLACED

END_OF_DOCUMENT_TOKEN_TO_BE_REPLACED
We and our partners use cookies on this site to improve our service, perform analytics, personalize advertising, measure advertising performance, and remember website preferences.Ok