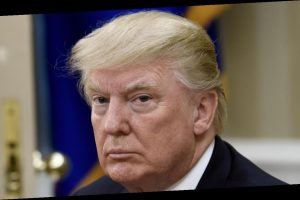 President Donald Trump‘s niece, Mary L. Trump, wrote a tell-all book about him, titled “Too Much and Never Enough: How My Family Created the World’s Most Dangerous Man,” and in it, she alleges he cheated on his SATs.

Mary alleges that he paid someone else to take the college admissions test for him and they earned him a high score. After attending high school in Queens, New York, Trump was admitted to Fordham University and transferred two years later to the Wharton School of the University of Pennsylvania.

Mary Trump is a clinical psychologist, and the New York Times says that she believes her “uncle has all nine clinical criteria for being a narcissist.”

“The fact is,” she wrote in her book, “Donald’s pathologies are so complex and his behaviors so often inexplicable that coming up with an accurate and comprehensive diagnosis would require a full battery of psychological and neurophysical tests that he’ll never sit for.”

Recently, a different celeb actually called Trump a “sociopath,” not a “narcissist” as Mary Trump alleges.

Two Hollywood stars were embroiled in a similar scandal throughout the past year where many were accused of paying to have others take the SATs for their kids.