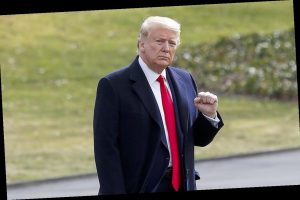 The former President of the United States has been banned from returning to Twitter after he was kicked out of the social media platform following Capitol riot.

The former U.S. leader was kicked off the platform last month (Jan20) after making statements before the siege on the U.S. Capitol, which Twitter bosses found to be inciting violence, and now they’ve made it clear Trump won’t be returning any time soon.

“Our policies are designed to make sure that people are not inciting violence, and if anybody does that, we have to remove them from the service and our policies don’t allow people to come back.” Meanwhile, problems continue to mount for the former president, who is currently at the centre of an impeachment trial – he has been banned from ever returning to the SAG-AFTRA acting union after resigning last week ahead of a disciplinary hearing, and now ex-“Saturday Night Live” star Bobby Moynihan has called Trump a “nightmare” host.

The businessman and reality TV star hosted the sketch show in 2015 and Moynahan insists it was not a pleasant experience.

“He was not the worst host; he was just delusional,” the funnyman tells the “Last Laugh” podcast.

“He did something completely wrong and they were like, ‘Cut! Hey, you did that wrong’. And he was like, ‘No, I didn’t…’ He tried to prove it… They showed it to him and he was like, ‘I like it better that way.’ “