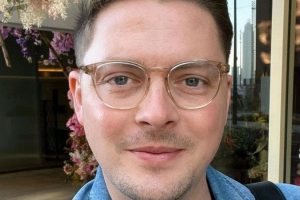 Love Island’s Dr Alex George has revealed a new tattoo on his wrist that he got in a touching tribute to his little brother Llŷr, after he took his own life in July 2020.

The 19 year old was about to train as a doctor, and tragically passed away after suffering with mental health troubles.

Alex’s new wrist tattoo is Llŷr’s name in Llŷr’s own handwriting, which was taken from one of his schoolbooks.

The former Love Island 2018 contestant posted two photos; the first of the tattoo and the second of the school book. He captioned it: "Llŷr 'God Of The Sea'. The most beautiful name, it means so much to have it done in his handwriting. We will never forget you my boy x.”

Alex's newest tattoo is placed underneath a previous inking of a wave that he got in tribute to his brother in 2021.

He wrote: "I can’t believe I am actually writing this post.

"I have lost my beautiful little brother to mental health. I love you so much Llŷr. The kindest and most caring soul.

"I was so proud of you starting medical school next month, you would have been the most incredible doctor.

"We are hurting so bad. No words can explain.

"As a family we are devastated. We love you and miss you so much. Please rest in peace x Our boy.”

In February, Alex took to Instagram to pen a heartfelt message about his younger brother, on what would have been his 21st birthday.

Alex wrote, "It’s Llŷr’s 21st birthday today. Over the last year I have spoken a lot about how hard losing him has been, I am sad though that I haven’t talked more about the person he was.

"Let me tell you a little about him. Llŷr was kind, sensitive, funny, loved his cars, and was a great brother and son. He was exceptionally clever and a great sportsman. We used to speak for hours about the latest cars and what our dream one would be.

"Llŷr loved his sport so much, at school he used to score try after try in rugby. He was a perfectionist at heart. When he got into basketball he used to practice shooting at the net for hours each evening.

"Above all Llŷr had a good heart, he had an ability to look into your eyes and could feel exactly what you were feeling. In many ways he felt your pain and your struggles deeply and always wanted to help. He was an empath like no one I have ever known.

"I would do anything to be sat drinking a cold beer with you today for your 21st my boy. You will never be forgotten and you give me so much strength. Mum, Dad, Elliott and I send you the biggest happy birthday, we just wish we could be with you, even for a day. I love you my boy."