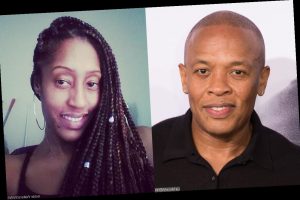 LaTanya Young, who hasn’t seen the record executive in 17 years, says she thought her relationship with her father would be better after Nicole Young was out of the family, but it seems like he ‘gave up’ on her.

AceShowbiz -Being one of Dr. Dre‘s children doesn’t make LaTanya Young secured financially. The eldest daughter of the music mogul, whom he shares his ex Lisa Johnson, reveals she has been struggling to make ends meet as she has been estranged from her father for almost 20 years.

The 37-year-old, who now lives in Victorville, California, tells Daily Mail that she hasn’t seen Dre, whose real name is Andre Romelle Young, in 17 years. “I was on assistance for a while, it’s embarrassing to say,” she says of her dire financial situation. To keep her family afloat, she worked as a receptionist before and recently applied for jobs at Amazon and FedEx.

Hoping for a better future, she’s currently training to become a registered nurse. “In a year I will be qualified as a nurse,” she claims, before admitting how it is to juggle her work and study, “It’s hard but I’m strong.”

While saying that “money is not what I want,” LaTanya desperately wants a relationship with her father, whose fortune is estimated at $800 million. “I really just want to have closure. I just want to be able to spend time with my father,” she shares.

LaTanya, who has four children, Tatiyana, 16, Rhiana, 13, D’Andre (named after his grandfather), eight, and Jason III, three, says Dre has never seen his grandchildren. She says she doesn’t even have his personal cell phone number.

In fact, LaTanya had to go through third parties whenever she tried to communicate with her father since she was a kid. “I hated going through third parties. If I needed him, I’d have to go to the studio and get bombarded and talked to by his security,” she recalls. “I would have to go through his accountant or his right hand man, I would never know whether he got my messages. I have never had a direct line to him.”

“He did offer to help me with tuition but he never speaks to me,” LaTanya says of the 55-year-old. “He never set me up to be able to not need him. He never paid for college, he never did anything to help me and my sisters get along.”

And she blames Dre’s now-estranged wife Nicole Young for her strained relationship with her father. “She was very standoffish and mysterious,” she says of her step-mom. “I got the impression she didn’t care to know any of us.”

LaTanya goes on claiming that she and her sisters, LaToya and Ashley, once got turned away by Nicole when they visited their father’s home. “I went to the gate and our names weren’t on the list,” she recounts. “The security lady still let us in because she knew us. But Nicole turned into Cruella de Vil.” She was 16 years old at the time.

Dre is currently still embroiled in a messy divorce battle with Nicole, who seeks $2 million a month in temporary support. The hip-hop mogul is opposing that amount. He reportedly wants to settle the divorce soon, because the longer they wait to go to trial, the more money it’s costing Dre for the attorney fees alone.

END_OF_DOCUMENT_TOKEN_TO_BE_REPLACED

END_OF_DOCUMENT_TOKEN_TO_BE_REPLACED
We and our partners use cookies on this site to improve our service, perform analytics, personalize advertising, measure advertising performance, and remember website preferences.Ok