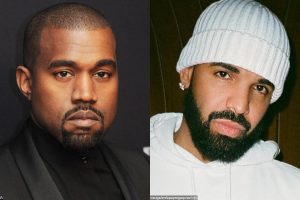 Ahead of the release of the ‘Follow God’ rhymer’s new album ‘Donda’, the ‘In My Feelings’ hitmaker has reportedly squashed his beef with the Atlanta-born artist.

AceShowbiz –Drake and Kanye West may be back on friendly terms again. Ahead of the release of the latter’s new album, the two rappers have reportedly squashed their on-and-off feud that had been going on for years.

The state of Drake and Kanye’s friendship was revealed throughout a Twitter conversation between several industry execs. With the Atlanta-born star being set to launch his album “Donda” on Friday, July 23, Jasmyn Lawson, the content executive at Netflix, speculated that Drake would thwart it by dropping his own project, “Certified Lover Boy”. “Drake should be petty and drop CLB on Friday,” she suggested.

Apple Music host Low Key then chimed in, seemingly thinking the same with Jasmyn. “I’d put money on it he does,” he tweeted back with a rolling on the floor laughing emoji. Former music journalist/music manager Karen Civil, however, begged to differ, claiming that Drake won’t do it because he and Kanye are no longer feuding. “The friends now. He not [gonna drop on the same day],” so she claimed. 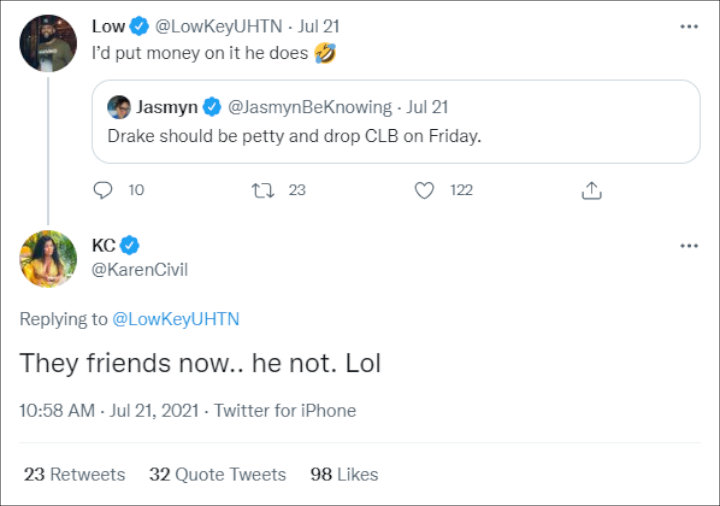 It’s unclear when the duo ended their beef and who extended an olive branch first, but Karen is known for her reputation of sharing legitimate information. Neither Drake nor Kanye has ever spoken of each other recently.

Drake and Kanye started as friends early on in the Canadian star’s career. The rift between the two started when Ye was brought into Drake’s infamous beef with Pusha T. In his song “The Story of Adidon”, Pusha revealed that Drizzy was hiding a child and he claimed that it was the Yeezy designer who leaked the information to him.

Since then, Drake and Kanye have been taking jabs at each other through their sneaky lyrics. The “Black Skinhead” MC even barred the “Hotline Bling” hitmaker from using a sample that he had earlier sent to the Canadian star, dropping his “poopity scoop” bars on “Lift Yourself”.