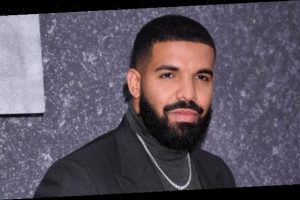 Drake’s son Adonis is growing up so quickly! The Canadian rapper shared a pic of him with long, curly hair in celebration of Father’s Day.

Drake paid tribute to all the dad’s “handling business” when he posted a rare photo of his son Adonis, on Father’s Day. The 30-year-old took to Instagram on June 21 to share the cutest pic of his mini-me, whom he shares with Sophie Brussaux. “Happy Fathers Day to all the real g’z handling business,” he captioned the shot, adding a globe emoji. In the pic, little Adonis was curled under a duvet in bed, wearing a white sweater featuring colorful stars. He held his hand up to his face and pouted while looking at something out of frame. He also showed off a full head of long, blonde curls!

It comes a few months after Drake posted pictures of Adonis for the very first time on his Instagram page. “I posted those pictures. It was great for me. It was great to just share that with the world and I just felt like … It wasn’t even anything I talked to anybody about or anything I planned,” the rapper said on episode two of Lil Wayne’s talkback show.

Drake’s son was born in October 2017 in secret. The next spring, in May, Pusha T called out Drake in his now infamous diss track “The Story of Adidon” and revealed the identity of the mother of Drake’s child. — At the time, Drake’s son was 7-months-old. Some of the song’s lyrics included, “Adonis is your son and he deserves more than an Adidas press run. That’s real. Love that baby, respect that girl.” Drake later confirmed the news on his album Scorpion, specifically in the track, “Emotionless.” He rapped, “I wasn’t hiding my son from the world, I was hiding the world from my son.”

Fans were shocked to see Adonis resemble Drake’s mother, Sandy Graham, so much — but were in awe of just how cute he was! “What is most important for you right now is to connect to your own inner light. This will create the biggest opening of all,” he captioned his Instagram post featuring Adonis from March. Our hearts!