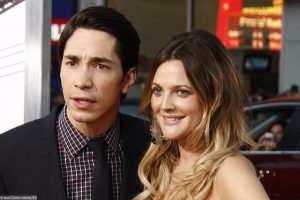 Having dated her ‘Going the Distance’ co-star in the past, the host of ‘The Drew Barrymore Show’ praises him for being one of the ‘sharpest, wittiest’ people she knows.

AceShowbiz –Drew Barrymore thinks Justin Long “gets all the ladies” because he’s so funny. Having dated her “Going the Distance” co-star, the 47-year-old actress admitted she was “very much in love” with him because he made her laugh so much.

“We dated for many years, I was very much in love with Justin, you know why? Because he’s funny, and he has the sharpest wit,” she said. “You want to know why he gets all the ladies? Well, there’s a few reasons, but the comedy is definitely [one of them]. He is one of the sharpest, wittiest [people], he’s brilliant and he’ll just knock your socks off with laughter.”

The talk show host always find out “weird” that she and Justin attracted so much attention because they were “not exciting.” Speaking to Mike Birbiglia on his “A Little Bit Extra” podcast, she said, “I didn’t get why we were ever an interesting couple “Like, that didn’t make any sense to me, like, who cares? We’re not exciting.”

While Drew also has a lot of love for her “Music and Lyrics” co-star Hugh Grant, she admitted she was shocked when they first met to find he is nothing like the type of character he had portrayed in romantic comedies such as “Four Weddings and a Funeral“.

She said, “Now Hugh and I did not date. Not even a little. I was so upset because when I met him it turns out he’s a totally grumpy old man, and you’re like, ‘Wait, no, you’re Hugh Grant! You’re supposed to be like the dashing rom-com guy, what is going on?’ And then you fall in love with him for the real Hugh.”

Justin is now in a relationship with Kate Bosworth. From 2007 to 2010, he was romantically linked with actresses Maggie Q and Kirsten Dunst, and Chvrches singer Lauren Mayberry.