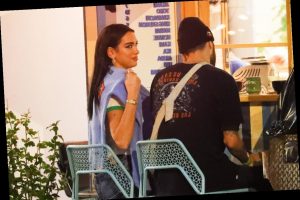 Miley Cyrus has been previewing an upcoming collaboration with Dua Lipa for months. She’s shared Instagram pictures together, teased it in interviews and the two singers have been spotted together in New York. Now, Dua Lipa offered some hints about the song and music video they’re working on.

The “Levitating” singer was a guest on the Zach Sang: Just the Interviews podcast on Nov 7 to discuss her Studio 2054 project and new album. Sang asked her about her collaboration with Cyrus too and here’s what she revealed.

This project wasn’t the first potential collaboration between Cyrus and Dua Lipa. The latter explained why they both waited for the right song.

“We were meant to do a song together a little while ago and then we kind of decided that it didn’t really represent us,” Dua Lipa told Snag. “So we wanted to get in the studio and work on something that felt very unique to us and something that people hadn’t heard from us before.”

Dua Lipa will appear on Miley Cyrus’s next album

Dua Lipa confirmed that she is collaborating with Cyrus on a song for Cyrus’s forthcoming album, Plastic Hearts.

“I think the song that’s going to come out soon,” she said. “I’ll let her do all the announcing, but I think that our song is like a perfect combination of both our styles and I think when you hear it you’ll understand. I feel like Miley is also doing such cool 80s glam rock type vibes. I think I was able to really quite easily intertwine myself into this world that she’s creating and to get to be a part of it.”

“We shot a really fun music video which I’m excited for everyone to see,” she said. “It was a blast. We had a lot of fun but I’m going to leave all the teasing and all the excitement toh er because I know she’s super excited about her record which is dropping on the 27th.”

Dua Lipa says she remained hands on with Cyrus when developing the song and all the surrounding elements to it.

It was really easy. She’s so easy to work with and so open with her ideas. I think in that sense, we collaboration-wise, it was a constant back and forth of us just sending ideas and talking about how we want it to look like, what we want it to sound like, what we should do for the video, who we should work with, who’s going to direct it. All this stuff, there was a c instant collaboration. She’s really sweet and down to earth and really fun and easy to work with. So I’m excited. I’m not going to give too much away.

END_OF_DOCUMENT_TOKEN_TO_BE_REPLACED

END_OF_DOCUMENT_TOKEN_TO_BE_REPLACED
We and our partners use cookies on this site to improve our service, perform analytics, personalize advertising, measure advertising performance, and remember website preferences.Ok