Home » Celebrities » Duane Chapman to Moon Angell: Will You Marry Me?

Duane Chapman to Moon Angell: Will You Marry Me? 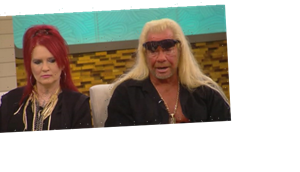 Last week, a shocking clip of Dog The Bounty Hunter proposing to Moon Angell aired. Then, Duane’s daughter Lyssa’s response got her arrested.

In the full clip, Duane is trying to quash rumors of this romance. But it’s not very convincing. …

So, for weeks, two of Duane “Dog The Bounty Hunter” Chapman’s daughters have been accusing a family employee of muscling in on the family.

Moon Angell has worked for the Chapman family for decades, since before Duane and Beth married.

Now, some of his own family members say that she is trying to replace Beth, even going so far as to swap out her belongings in a closet.

This feud went public on social media, which is why Duane decided to take Moon with him for a sit-down on Doctor Oz.

“One time, she said: ‘If something would happen …'” Duane recalls in this clip. “Because I always said, ‘You’re not gonna die.'”

“I think this will put a stop to a lot of this,” Duane says vaguely.

Then, his tone shifting and his voice tearful, he turns and asks: “Moon Angell, will you marry me?”

“What?!” an allegedly astonished Moon replies, followed by a nervous laugh.

“So what are you saying?” Duane prompts, prompting Moon to face him again.

With the least convincing line delivery that most people will see from fully clothed people on the internet, she replies: “We’re friend, Duane.”

“I love you as a friend,” she emphasizes.

“That’s it,” Duane announces, as if matters are now settled.

“Right at this very moment,” Moon explains, “I don’t see you as that.”

She protests: “I love you and Beth as my friends.”

We don’t usually give Mehmet Oz credit for much, but he manages to watch this all play out with a straight face.

“I know that,” Duane says, explaining that he simply wanted “everyone else to know,” too.

Oz asks Moon if her relationship with Duane could be described as “intimate.”

“It has to be intimate because there’s a lot of powerful things going on with Dog,” Moon replies, sounding like she’s playing word games.

Most of us are understandably leery of conspiracy theories, but something about this feels wildly off.

So, let’s get real for a moment: Duane’s mind doesn’t work like most people’s. That’s been apparent, well, from when we all first heard of him.

One might look at what looks like a rehearsed but poorly acted charade as an insulting attempt to pull the wool over people’s eyes.

In his mind, maybe this seemed like a believable plan? It’s hard to say what he might be thinking at any given moment. Obviously.

When it comes to the story of how Beth’s closet got emptied out and replaced with Moon’s belongings, Moon says that she can explain.

Apparently, any time that Duane would walk past, he would burst into tears. This is a man very in touch with his grief.

To hear Moon tell it, she emptied it for him, but that did not prevent him from crying at the sight of the empty closet.

This is when Duane allegedly begged Moon to put her own belongings in the room. That is … deeply bizarre.

So, Moon is not Duane’s fiancee. That, at least, we believe. The “proposal” was the result of a goofy and transparently prepared stunt.

The clear emotional dependence, however, has alarmed Duane’s adult children, and it appears that he is happily siding with Moon.

Lyssa accuses her father of having attempted to blackmail her by threatening to reveal past suicide attempts. Nasty stuff.

And things may only get worse when it comes to the Chapman family dynamic.

At present, Duane is worth about $6 million. That’s a sizable chunk of change, even for a reality star.

But The Sun reports that WGN America has canceled his comeback show, Dog’s Most Wanted, after one season.

“WGN called Dog last week to tell him the show was canceled,” an insider reports.

“He would absolutely have loved to make a second season of the show,” the source notes, “so [he] is obviously disappointed.”