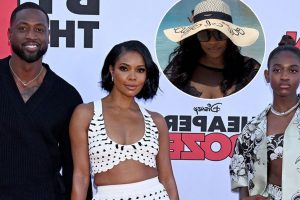 Dwyane Wade and his ex-wife Siohvaughn Funches-Wade are not on the same page about their child.

As you will likely remember, the basketball player’s daughter, Zaya Wade, came out as a transgender female back in 2020. Wade has been super supportive throughout it all, and very publicly! He explained during an appearance on Ellen at the time:

“Me and my wife, my wife Gabrielle Union… we are proud parents of a child in the LGBTQ+ community and we’re proud allies as well. We take our roles and responsibility as parents very seriously.”

“I don’t know if everybody knows, originally named Zion… Zion, born as a boy, came home and said, ‘Hey, so I want to talk to you guys. I think going forward I am ready to live my truth. I want to be referenced as ‘she’ and ‘her.’ I would love for you guys to call me Zaya.’”

Now, two years later, the athlete is finding himself in a legal battle over the child’s ability to legally transition.

Siohvaugn filed a legal petition against the recognition of her daughter’s legal change of gender and issuance of a new birth certificate to reflect that change, according to legal documents. The child, who is 15 years old, must get a court order and permission from both of her parents to go through with the change. However, Siohvaughn is now claiming her ex-husband is “attempting to circumvent the requirements of the Illinois final custody order judgment entered on March 14, 2011,” adding Dwyane “shall discuss with and obtain input in the major decisions affecting care, welfare, activities, health, education and religious upbringing” of their two children, including Zaya. The mom explained in the documents:

“There are multiple factors to be considered by the Court in determining the requests to change the minor child’s name and gender. The minor child is fifteen and one-half years old.”

She then went on to claim her ex-husband is:

“Positioned to profit from the minor child’s name and gender change with various companies through contacts and marketing opportunities including but not limited to deals with Disney.”

Yeah, you didn’t read that wrong. She’s claiming Zaya’s decision to legally transition is being influenced by Dwyane — because of the potential financial gain he could receive by being the parent of a trans child. She explained:

“I have concerns that (Dwyane) may be pressuring our child to move forward with the name and gender change in order to capitalize on the financial opportunities that he has received from companies.”

Wow. This is the first we’re hearing of extra financial opportunities for transitioning. She added:

“This matter has been highly reported in the media and there will likely be media pressure on the minor child.”

To be honest, it kiiiinda sounds like someone has been watching some right wing news sources that love to paint Hollywood as somewhere poor white cis folks can’t catch a break — despite all evidence to the contrary.

But the 41-year-old mother says she has receipts! She cited an interaction with the Miami Heat alum as evidence:

“In April 2022, (Dwyane) invited me to one of his residences in Atlanta, Georgia. During this occasion, he informed me that a lot of money had been already made and that additional money will be made in relation to our child’s name and gender issue. (Dwyane) told me that he intended to make our child very famous due to the name and gender issue and also informed me that there would be endorsements/contracts associated therewith.”

“I inquired what companies had made deals, or was willing to make deals, with (Dwyane) regarding our child. Zion, who was present at the time, answered that various companies were interested and that Disney was a prospective company.”

While Siohvaughn, who is represented legally by Mark Gross, objects to Zaya’s legal transition NOW, she says it’s largely to prevent the potential financial gain from motivating the decision, and is asking the court to deny the request until Zaya is 18 years old. That she’s all about protecting her kid.

We should note that she is clearly continuing to use Zaya’s dead name in the legal materials. While that is still her legal name, she could have offered an AKA out of respect. It definitely gives the impression Siohvaughn doesn’t recognize the transition at all — and if that’s the case, maybe this objection is more about that and less about supposed Hollywood deals. The legal filings continued:

“(Siohvaughn) contends that the minor child be given the opportunity at the age of majority, which is two and one-half years away, to make this monumental decision for themselves. She has strong concerns that (Dwyane) may be pressuring or incentivizing the minor child with lucrative financial opportunities in order to proceed with this instant Petition.”

Now he’s bribing her to be trans? Oof.

She added she is “concerned that due to the high profile nature of this case if the minor child is not fully in support of the requested relief (and is being pressured by Dwyane or financial opportunities), the minor child will experience further scrutiny and pressure from the media.”

Look, we get that the child’s decisions being publicized could be considered unhealthy — but that’s the other edge of the sword with rich and famous parents, right? As far as the incentives to transition, we can’t imagine any cis kid making that deal for money. Can YOU?? Finally she noted:

“I am concerned that our child is being commercialized at a young age and also of the uncontrollable consequences of media exposure i.e. cyberbullying, statements and/or pictures taken out of context of our child, and the unwanted spotlight focused on our child.”

As of now, Dwyane can’t make any decisions due to his custody agreement with Siohvaughn. As required in Illinois, he needs an “affidavit from the individual AND a declaration of gender transition to be completed, by either a licensed health care professional or licensed mental health professional to confirm that the individual has either undergone clinically appropriate treatment for gender transition or has an intersex condition”. A hearing is set for December where a judge will make the final decision.

We sure hope both parents truly do just want what’s best for their daughter! What are your thoughts, Perezcious readers? Let us know in the comments down below.