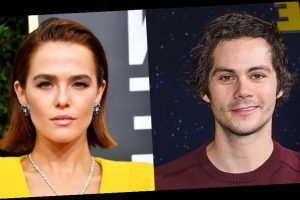 Dylan O’Brien and Zoey Deutch are starring in a movie together!!

It was just announced that the actors will star in the upcoming film The Outfit, according to Deadline.

The film from Focus Features and FilmNation will shoot in London starting in March, and will also star Mark Rylance and Johnny Flynn.

The Outfit follows “Leonard (Rylance), an English tailor who used to craft suits on London’s world-famous Savile Row. But after a personal tragedy, he’s ended up in Chicago, operating a small tailor shop in a rough part of town where he makes beautiful clothes for the only people around who can afford them: a family of vicious gangsters.”

Graham Moore, who wrote The Imitation Game, is making his directorial debut with the pic, which he also wrote.

“If you’d told me years ago, when Johnathan and I were first dreaming up this story, that I’d get to direct my first film with a cast as exquisitely talented as Mark, Zoey, Dylan and Johnny, I’d have said you were nuts,” Graham said in a statement. “And honestly, if you’d said that back then, you might have been. This film is such a deep labor of love for me and our whole team, and I could not ask for better partners than our friends at FilmNation and Focus.”