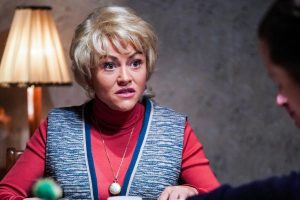 On EastEnders, viewers are taken back to 1979 to visit the Mitchell family and uncover a secret from their chequered past while Samantha Keeble – played by Alison Newman – continues to pile pressure on Phil Mitchell (Steve McFadden).

It will see the history of the iconic Mitchell family unearthed for the first time. Peggy Mitchell (Jaime Winstone) isn’t having such a great time with hubby Eric, and her sons Phil and Grant Mitchell (originally played by Ross Kemp) are beginning to make their own way in the world.

Things take an unexpected turn when Eric takes the lads out on a “job”. Will we finally learn why Keeble is so obsessed with the Mitchells?

In the present day, meanwhile, Keeble threatens to cause trouble for Kat Slater (Jessie Wallace) as her wedding approaches. Phil makes a desperate attempt to get himself out of his situation, but will it be enough?

Billy – played by Perry Fenwick – is shocked and in a quandary after coming face to face with Little Mo’s son, Freddie – who is portrayed by Kevin Coughlin.

After going out with Whitney Dean (Shona McGarty), Frankie – played by Rose Ayling-Ellis – is spooked by the advances of a stranger and terrified when he follows her home.

Elsewhere, Sharon Watts – played by Letitia Dean – invites new man Matt back to hers, there’s a spark between Finlay Baker (Ashley Byham) and Whitney, and Vinny Panesar (Shiv Jalota) is paranoid about his relationship with Dotty (Molly Conlin).

The special episode – which will see the Mitchell family attempt to navigate through economic turmoil in Britain – will see the family in a conventional 1970s dining room.

In a first look of the episode, Peggy can be seen flanked by her two sons, Phil and Grant, played by actors Daniel Delaney and Teddy Jay.

This will be followed by a young Billy Mitchell, who will be portrayed by George Greenland, lurking in the background, while his older brother Charlie Mitchell, played by Charlie Heptinstall, is next to him in the corner of the room.

And after never being featured in EastEnders, viewers will finally see Peggy's husband Eric – played by George Russo – and he can be seen sitting at the dining table near Phil.

It's believed the episode will follow some hidden things about Phil's past, which could bring some light as to why DCI Keeble has a vendetta against the Mitchell family.

Speaking about the episode, Chris Clenshaw, Executive Producer, said: “We’re delighted to be welcoming an incredible cast of actors to set for this special flashback episode, including the luminous Jaime Winstone as a young Peggy Mitchell."

He added: "Focused on the Mitchell family, audiences will embark on a rollercoaster journey to the East End of London in 1979 where they’ll delve into the family’s past, seeing much-loved and iconic characters, as well as meeting characters from the show’s history that have never been seen on screen before.

"There are twists, turns and secrets revealed – after all, trouble is never too far away where The Mitchells are concerned!”

The EastEnders Mitchell family flashback special will air on BBC One and BBC iPlayer on September 5 at 7.30pm.