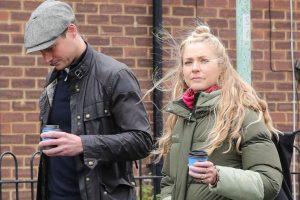 EastEnders stars Maddy Hill and James Farrar have been seen enjoying a coffee break in between filming the hit BBC soap.

James and Maddy have been spotted enjoying coffee breaks and walks together away from Albert Square, proving that they have formed a friendship away from the cameras.

In one image, Maddy is seen wearing an over-sized green coat as she walks alongside James, with him keeping his head down whilst wearing a grey flat cap and black leather jacket.

A second photo sees the pair mingling with fans, with James taking the lead in a tight purple T-shirt and black jeans.

A source told OK! of the pair's friendship: "Maddy and James are together outside the EastEnders set a lot.

"They're often spotted grabbing lunch during filming breaks. They seem to get on really well and have become great friends."

James has previously spoken on the chemistry between their characters, telling Inside Soap : "[Zack] was immediately drawn to Nancy – and it was not reciprocated!

"That's why he enjoys that relationship, it's that tough love, and she sees right through him. That attracts him more than the girls who just look at him and swoon."

James is married to wellness expert and author Ali Roff Farrar, who he wed in March 2017.

The beautiful brunette posted to her 6,000 Instagram followers to celebrate their anniversary, writing: "4 years since we said those vows, cut the cake and danced on the tables… I love you endlessly @jamescfarrar."

James also gushed over his wife in October 2019, with him writing of Ali: "When we first met we were 'unavailable'.

"Our interests were football, netball, partying and being rascals. We couldn't help falling for each other and a lot has happened since.

"In our 12 years together Ali has spent time travelling the world educating herself on Eastern and Western philosophy. I spent a year away from London filming a TV show. We moved to Blackheath together and got married."