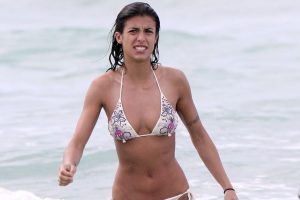 Italian model and actress Elisabetta Canalis was only 30 years old when she became a household name in the U.S. after she was whisked around the world in a 2-year relationship with America’s favorite A-lister George Clooney.

Shortly after Canalis and GC split in 2011 Elisabetta took the stage of “Dancing with the Stars” but was quickly eliminated after only two episodes.

Even though she faded from the Hollywood scene and married a doctor in 2014 and had a daughter a year later … Elisabetta is looking hotter than ever and is still rocking some barely-there bikinis!