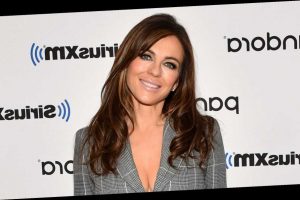 Elizabeth Hurley isn’t letting the autumn chill get her down.

The model and actress took to Instagram on Tuesday and gave her 1.7 million followers another peek at her youthful beach bod with a throwback snap from the Maldives.

The 55-year-old was beaming while rocking a plunging one-piece halter black swimsuit. She paired the sizzling look with sunglasses and sun-kissed tresses. The star was posing in front of the jewel-hued Indian Ocean, which stretched into the horizon.

Hurley, who has been isolating in her Herefordshire country home alongside eight other family members, has been using social media to promote her swimwear line.

“I decided to venture into beachwear not only because I’ve always been obsessed with vacation clothes, but also because it’s an area where women, regardless of shape or size, can either look amazing or really get it wrong. I wanted to develop resort collections, which make women feel fabulous at any age,” she announced on the company’s site.

In May 2017, the star told Closer Weekly that being a mom inspired her to launch the brand. She previously took a break from Hollywood to focus on motherhood but found herself wanting to do something new professionally.

“Looking after my son became my number one task, and it was a joy to have someone else on whom to focus,” Hurley told the magazine. “I was 36 and had been worrying about myself for quite long enough. I stopped doing movies and TV for the first eight years of his life, and I don’t regret it for a moment. I always put him first."

When it came to launching her swimwear collection, Hurley added, “It allowed me to be more flexible with my time and work when Damian was at school.”

“Maybe when it’s over I’ll put my headlamps on full beam and make an effort,” she added.

The star compared living with her relatives to “The Waltons,” a ‘70s series that followed a family in rural Virginia during the Great Depression.

“There are nine of us,” Hurley explained. “I have my whole family here, including my mother, an aunt and a friend who has severe respiratory problems. I am completely paranoid that I won’t be able to keep them safe and I haven’t let anyone leave the house apart from me. I just nip out to local food stores and wear a mask and gloves. I’m terrified of bringing the virus back to my vulnerable guests.”

In the meantime, Hurley has discovered other ways to stay busy.

“Secretly, I’d much rather be gardening than doing anything else,” she said. “I’ve been outside doing things for at least five hours a day. My brother bought me a set of what he calls ‘lady tools,’ which are lightweight. I have my own shed with all my tools in it, and woe betides anyone else who uses them. Otherwise, I think I’m OK with everything.”

END_OF_DOCUMENT_TOKEN_TO_BE_REPLACED

END_OF_DOCUMENT_TOKEN_TO_BE_REPLACED
We and our partners use cookies on this site to improve our service, perform analytics, personalize advertising, measure advertising performance, and remember website preferences.Ok