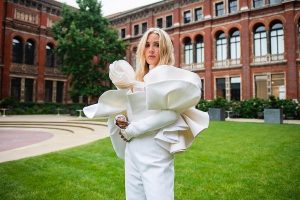 The ‘Love Me Like You Do’ hitmaker has revealed the name of her baby son in a post in a British newspaper, roughly a week after she delivered the bundle of joy.

AceShowbiz –Ellie Goulding has revealed the name of her newborn son – Arthur Ever Winter Jopling.

The “Burn” star and her husband Caspar Jopling recently welcomed their first child, with the new dad confirming the baby news with a photo on his Instagram Story last Sunday (02May21).

While Caspar had opted against revealing any more details, such as the tot’s gender or name, further facts were announced in a post in Britain’s The Times newspaper’s Births, Deaths and Marriages section.

The announcement also confirmed baby Arthur’s birth date as it read, “On 29th April 2021 to Elena Goulding and Caspar, a son, Arthur Ever Winter.”

Ellie announced she was pregnant last month (Apr21) as part of an at-home shoot for Vogue Magazine, revealing she discovered she was expecting while celebrating her first wedding anniversary last year (20).

The couple wed in August, 2019 at York Minster in England.

Caspar asked for privacy after his wife gave birth. “I don’t ever address the public attention that comes with Ellie’s job,” he wrote. “But during this magical and personal moment we would really appreciate being able to enjoy our privacy. Thank you x.”

Meanwhile, Ellie previously said of her pregnancy, “Becoming pregnant kind of made me feel human. I want a better word than womanly, (but) – I have curves I’ve never had before. I’m enjoying it. My husband’s enjoying it.”

The pregnancy also allowed her to patch things up with her mother due to a friction following her 2019 wedding. “There was nothing really to resolve. I have seen her since the wedding but not much since the lockdowns. But she’s been very good, we’ve all been very good. I can’t wait to see my new grandchild,” her mom said in a separate interview.