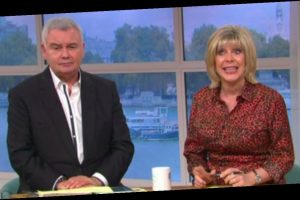 Like many people Emily Andrea was taken aback by the reports Eamonn Holmes and Ruth Langsford will no longer present This Morning on Fridays.

It's been reported that friends of the show Alison Hammond and Dermot O’ Leary will fill their void.

“It’s such a shame that Eamonn Holmes and Ruth Langsford will reportedly no longer be presenting Fridays on This Morning,” Emily wrote in her OK! column.

“I love their presenting style and I rate them as a duo, so I was sad to hear the reports.”

It’s no wonder Emily was saddened by the reports, as they struck up a bond when she and husband Peter co-presented a couples’ special with the well-loved duo back in September.

“They really looked after me and made me feel confident and relaxed. I think they’ll be really missed.”

However, Emily is staying optimistic about their rumoured replacements.

“I think Alison Hammond and Dermot O’Leary are great presenters though and I wish them all the best,” she said.

The reports started a week ago that Eamonn and Ruth are no longer going to be presenting the well-loved ITV show during their regular Friday slot, in a big switch-up on the This Morning sofa.

A source told The Mirror at the time: “Eamonn is pretty furious and everyone feels for him and Ruth, they are well liked on the team, but sometimes tough decisions have to be made.”

The reports came after a recent interview with new magazine in which Ruth revealed that she felt her job was safe.

“I think I am very good at what I do, and as long as they want me I’ll be there,” she said.

“I’ve been doing it a very long time and it seems we’ve been very popular, so I presume all those things will be taken into consideration.”

Dermot, who has previously filled in for Eamonn and Ruth, also addressed the speculation during a recent interview with Ireland AM.

“It is always tricky when there are colleagues and friends involved,” he admitted.

“There’s nothing confirmed yet, but you know, we enjoyed doing the summer, so we’d like to do more.

“But at the same time, you don’t want to tread on anyone’s toes or treat anyone badly, so you’re always sort of caught between a rock and a hard place on that sort of stuff.”

Although some good news may be afoot for Eamonn and Ruth, who have been married for 10 years.

Insiders have claimed that rival channel the BBC have taken the opportunity to snap the presenters up to host their own show.

“Eamonn and Ruth have a huge fanbase and are very experienced,” a source told The Sun.

“They can easily carry any number of shows, so producers at the Beeb are considering handing them a format to front.”

END_OF_DOCUMENT_TOKEN_TO_BE_REPLACED

END_OF_DOCUMENT_TOKEN_TO_BE_REPLACED
We and our partners use cookies on this site to improve our service, perform analytics, personalize advertising, measure advertising performance, and remember website preferences.Ok