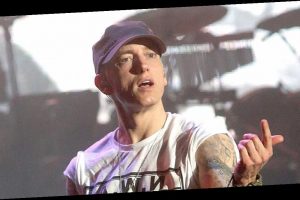 The hip-hop star, 47, made sickening references to the terror attack at Ariana Grande's concert in the city in 2017 in new song Unaccommodating.

In the song, Eminem raps: "But I plan to shout ‘bombs away’ on the game / Like I’m outside of an Ariana Grande concert waiting.”

The track also features lyrics about Iraqi tyrant Saddam Hussein, references to the 9/11 attacks in the US and murdered child beauty queen JonBenet Ramsay.

He raps: "And you backpedal that as a cowardly act / Like a Saudi attack when the towers collapse…

"Look at how I’m behaving me, they want me gone away / They wanna JonBenet me, I’m unaccommodating.”

Fans flocked online to condemn the rapper, with one writing: "Eminem is truly pathetic, a weedy, middle aged, rich white man who tries to be rebellious by comparing himself to an Islamic bomber.

"This is what he thinks of as cutting edge, when all he has to do is say white privilege theory is bulls**t to make the feathers fly."

Another added: "Get all the free publicity off the back of a suicide bomber you wanted? you low life bottom feeder! @Eminem . Here’s hoping you never step foot in [Britain] #Eminem ."

It's the second time Eminem has referenced the Manchester bombing in one of his songs.

He previously sparked fury with a 2018 freestyle battle rap, in which he stated: "Squashed in between a brainwashing machine

"Detonates the device strapped to his abdominal region I’m not gonna finish that, for obvious reasons."

Charlotte Hodgson, whose daughter, Olivia Campbell-Hardy, 15, died in the attack, called the lyrics from the 2018 rap battle  “disgusting” and “disrespectful”.

Suicide bomber Abedi murdered 22 people in the attack on May 22, 2017, and another 50 were left injured.

The blast ripped through the venue as fans were making their way out following the end of Ariana's  concert.

END_OF_DOCUMENT_TOKEN_TO_BE_REPLACED

END_OF_DOCUMENT_TOKEN_TO_BE_REPLACED
We and our partners use cookies on this site to improve our service, perform analytics, personalize advertising, measure advertising performance, and remember website preferences.Ok