Emma Roberts & Garrett Hedlund Being 'Strict' About Guests After Baby 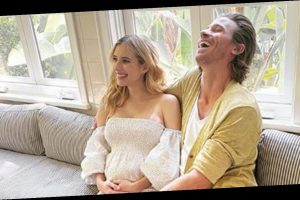 Emma Roberts and Garret Hedlund are keeping things low-key. The new parents are content and happy staying home and enjoying parenthood with their newborn baby boy.

A source tells ET that the couple — who welcomed their son Rhodes on Dec. 27 — were “trying to keep the news of her giving birth super low-key and under the radar.”

“They barely told any of their friends and have mainly been relying on their respective families,” the source adds. “They have in-house help that is teaching them and helping them out while they’re adjusting, but they are being very strict about quarantining and having visitors and guests.”

The source says they “want to fully enjoy and embrace this moment as a couple.”

“They’re not even fully accepting presents at the moment. Of course, if someone sends them something, they will, but they aren’t asking for anything,” the source continues, adding that Hedlund “has been doting” on Roberts since the arrival and “is educating himself on how to be the best father possible. He knew it would be a hard process, but he has fully jumped in to being a new dad.”

The source says that Roberts’ aunt, Oscar winner Julia Roberts, “is thrilled about the news and so happy for Emma and Garrett.”

News broke that 29-year-old Roberts was pregnant in June. The Scream Queens star and 36-year-old Hedlund have been linked together since March 2019, when they were spotted together shortly after she ended her engagement to Evan Peters.

In August, Roberts confirmed her pregnancy on Instagram with a picture of her cradling her baby bump, also revealing that she and Hedlund were expecting a baby boy.

In November, Roberts became the first pregnant cover star of Cosmopolitan, posing for the magazine’s  December/January issue and opening up about impending motherhood.

“At 16, I thought, ‘By the time I’m 24, I’ll be married with kids,'” she told the mag. “And then I was 24 and I was like, ‘Remember when I said I would be married with kids by now?’ With work, especially with acting — the travel, the hours — it’s not always conducive to settling down in a traditional way.”

ET spoke with Roberts in October, where she talked about her mom, Kelly Cunningham, accidentally spilling the beans on her pregnancy news on Instagram.

Watch the video below for more on Roberts’ pregnancy.