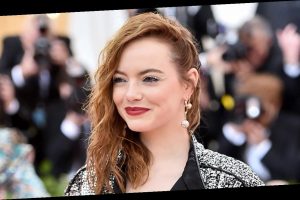 The 32-year-old actress appeared on The Tonight Show Starring Jimmy Fallon on Monday and recalled being nominated in the Best Actress – Comedy or Musical category in 2011 for her role in Easy A. Stone attended the awards show with her mother, and the two were seated next to none other than Angelina Jolie and Brad Pitt, who were still married at the time.

“That was my first time going to the Golden Globes,” Stone said. “It was very, very, very exciting so I took my mom with me. We sat next to Angelina Jolie and Brad Pitt. We were like, ‘Of all people to be sitting next to at that kind of a show, whoa.'”

Stone revealed her mom got a little tipsy that night and started chatting with Jolie.

“And my mom never drinks and she had champagne that night, which was probably not the best idea, but she was having a wonderful time,” she cracked. “[My mom] started asking Angelina Jolie like, ‘Do you have kids?’ And I was like, ‘You’ve gotta be out [of your mind].’ She completely knew, but she was making small talk. ‘How old are they? What are their names?’ She knew everything.”

Still, she noted that Jolie and Pitt were gracious.

“But they were so nice,” Stone recalled. “We had a blast. That was a very fun night.”

ET recently spoke to Stone about her latest film, The Croods: A New Age, and starting her own family “pack.” Watch the video below for more.

END_OF_DOCUMENT_TOKEN_TO_BE_REPLACED

END_OF_DOCUMENT_TOKEN_TO_BE_REPLACED
We and our partners use cookies on this site to improve our service, perform analytics, personalize advertising, measure advertising performance, and remember website preferences.Ok