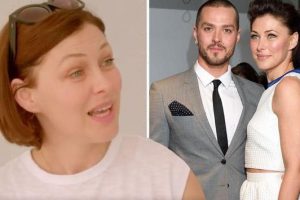 Emma and Matt Willis traditionally stayed apart the night before they got married in a hotel back in 2008. While they stuck to their no contact rule, this didn’t stop Matt expressing his concerns about his wedding speech through his best man.

The presenter, 45, recalled the moment she received a call from their wedding guest as Matt believed he had lost his pre-written speech.

Convinced he hadn’t, she told Matt’s friend where it was as she packed it for him.

Speaking to AJ Odudu on their new show AJ and Emma Get To Work, she explained: “We got married in a hotel so I slept in a single bed with my best friend – she was in the bed next to me.

“At about 6 o’clock in the morning, I heard from the best man that Matt had lost his speech.

Just hours before they exchanged vows, the Busted star tried to fix his mistake by re-writing the important words.

“So I went to the backpack and it was in there.”

Stunned by the admission, AJ exclaimed: “Oh no, Matt!”

Emma joked he was still with her 13 years later because she knew where to find everything.

The presenter and popstar tied the knot in July 2008 a year after he popped the question in Italy.

In 2018, they renewed their vows – this time with their three children present.

At their second wedding, their son Ace acted as best man.

The singer said of renewing their vows: “It was really fun. Stephen Mulhern did the ceremony.

“It felt like a roasting. I stood there and had the mickey taken out of me for 20 minutes.

“It was an amazing day. We just wanted to make it the most fun day possible.

“[The children] loved it. That’s what was so special about it. Ace was my best man.

It was a really special moment,” he added on Lorraine.

Emma and AJ Get To Work is available to watch on W Channel.