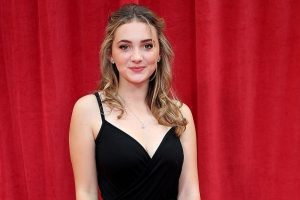 Rosie Bentham has revealed how ITV soap opera Emmerdale was there for her when she lost her dad John following a pulmonary embolism.

The 20 year old, who plays Gabby Thomas in the series, was 15 back in 2017 when her on-screen father vicar Ashley, played by John Middleton, died after suffering from dementia.

But just two years later, she went through a very real grieving process when her dad, who was also a vicar, passed away from a blood clot.

“I was doing the whole playing grief and then the next minute I’m actually grieving," Rosie shared, explaining how the soap helped her get through the difficult time.

She continued to tell the Mirror: "Everyone was there for me and I had some time off. I had a text from the cast seeing how I was.

“Work was a saving grace in the sense there was something I still loved to do and was passionate about. Grieving can go wrong for teenagers."

Rosie went on: “People can rebel but that was never me. You think, 'Life is so unfair, I don’t know why I am here any more'. I knew I had work – something I loved and was passionate about and I got to work every day.

"Emmerdale 100 per cent gave me stability.”

Last year, Rosie, her mum Marianne and three siblings Alice, Henry and James got together to celebrate Father's Day in his honour.

At the time, the actor told the same publication: "Dad loved being a dad more than anything else. It was such a big thing for him. It’s why I always tell my friends to reach out to their dads because you never ever know.

"When you have lost a parent, Father’s Day can be quite daunting. It can be quite a difficult day. I have it as a day of reflection."

Rosie, who recently shared a peak inside her home, lives in Nottingham with her mum and three siblings.

She has been acting since she was a child and while Emmerdale is her first major credit, she has also played parts in smaller stage productions. She also appeared in one episode of CBBC's Crackerjack in 2020.

While learning to act, she played roles in local productions of Oklahoma, Fiddler on the Roof, Sound of Music and Annie.

Rosie has played a part in Emmerdale since she took over Annelise Manojlovic, who had played Gabby since birth. The same year she was long-listed for the Best Soap Newcomer award at the TV Choice Awards.

For all your updates on Emmerdale's Rosie Bentham, sign up to our daily OK! newsletter.