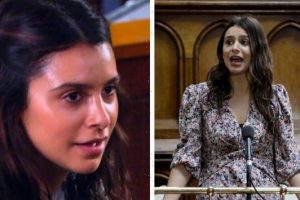 Emmerdale fans have been watching on tenterhooks as the action unfolds. However, Paige Sandhu reports that even more jaw-dropping scenes are waiting in the wings as Meena puts on her best victim performance and prepares to cheat justice for her murderous and malevolent antics.

“[She] does have delusions of grandeur, which is a psychopath symptom,” Meena warned.

“In her mind, she’s going into this trial, she’s going to blow them all away and of course they’re going to believe her above everyone else who’s taking the stand.

“She’ll probably get away with it because it’s Meena and she actually gets away with everything.”

In fact, Meena is so convinced that she’ll literally get away with murder that she is “exhilarated” when she arrives at the stand.

In fact, she chooses exactly the right clothing to paint a picture of herself as a wronged and wounded victim.

“[She’ll be wearing] this flowery dress that you would never see Meena in ever,” Paige revealed to Express.co.uk and other publications.

“It was chosen to [make her] look like this sweet, lovely, innocent girl who couldn’t possibly kill a bunch of people.”

However, as Emmerdale fans know only too well, this portrayal could scarcely be further from the truth.

When asked how Meena will feel when she enters the courtroom with all eyes on her, Paige confirmed that Meena’s delusional emotions will cause her to feel on top of the world, before explaining how she portrayed this aspect of her character.

“It’s like a dream come true [for her]. The way I played it was like… that feeling of walking in on your wedding day when you’ve had your hair done and you’re shining and you’re glowing and everyone’s like ‘Oh my God isn’t she beautiful,'” she explained.

“That’s what she feels like – as if she’s won an Oscar!

“The energy that she gets from that, and that she feeds off, is so exhilarating.”

Meanwhile, though viewers have already caught a glimpse of Meena trying to manipulate prison officer Ian Beaker, she will soon feel he would be willing to bend the law for her, while becoming another string in her bow to help her evade justice.

“She’s been using every single tool in her toolkit to work him, to charm him, to manipulate him,” Paige reflected. “[She’s] using his weaknesses against him, so she’s got him in her pocket and she believes that, if asked to, he would do illegal things for her.”

Yet, while playing the role of the wounded woman, Meena hasn’t accounted for the testimony of a real-life, genuinely distressed one – and she gulps when sister Manpreet steals her shine by breaking down in authentic tears.

Rebecca Sarker, who brings Manpreet’s character to life during tense and emotional upcoming scenes, has warned Express.co.uk that she might be “coming back with a vengeance”.

Meena is excited to see her sister again and fantasises about bringing her down so that, if she cannot escape, the pair can be “sisters together in prison”.

However, she is realistic about the fact that Manpreet despises her.

Meanwhile, Rebecca confirmed that the defence will use Manpreet’s past against her “to put her suitability as a witness in doubt”, leaving her to “struggle under the spotlight”.

Will manipulative Meena get her own way in court, while victim Manpreet “buckles under the weight of expectation”, or will justice prevail after all?

Fans can tune into Emmerdale – every weekday on ITV at 7:30pm – to see how the scenes unfold.