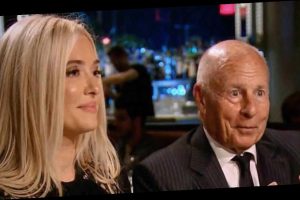 The Real Housewives of Beverly Hills star Erika Jayne’s estranged husband, Tom Girardi, has been placed under a temporary conservatorship amid their split.

“The court finds it necessary to hold the hearing in the absence of the Proposed Temporary Conservatee to prevent harm,” the documents read.

Late last month, Robert filed documents to become the temporary conservator of his brother’s person and estate amid Tom’s divorce from 49-year-old Erika. The documents claimed that Tom’s current condition “has sadly deteriorated to the point where he cannot care for himself without assistance.”

“His short-term memory is severely compromised and, on information and belief, he is often not oriented as to date, time or place,” the documents state.

The documents also claimed that Tom — who aside from his divorce, is currently in bankruptcy and in the middle of lawsuits — is “unable to handle his financial affairs and protect his property at present, despite serious financial and legal problems.”

Erika filed for divorce from Tom on Nov. 3, listing the date of separation as “TBD” and citing irreconcilable differences. In her filing, she requested spousal support from Tom and asked the court to terminate its ability to award spousal support to him. In addition, she asked that he pay all attorney’s fees.

Tom responded to her petition for divorce, also listing their date of separation as “TBD” and citing irreconcilable differences as the reason for their split. The court docs obtained by ET at the time revealed that he is asking to terminate the court’s ability to award spousal support to Erika and that his estranged wife pay his attorney’s fees.

Meanwhile, a source close to Erika and Tom previously told ET that Tom has not been well for a long time and that their current situation will play out on RHOBH when the show comes back. According to the source, Erika is renting the home she is living in right now as she plans out the next chapter of her life.

END_OF_DOCUMENT_TOKEN_TO_BE_REPLACED

Eve Hewson, daughter of U2 frontman Bono, has revealed that her dad had to stop hiring “good-looking” support bands because she was a “troublemaker.” In […]