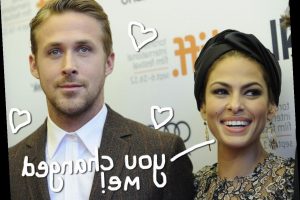 Eva Mendes was happy to shift her priorities for Ryan Gosling!

As you’re likely aware, the super-private A-lister couple tends to stay out of the public eye, especially because of their daughters, 6-year-old Esmeralda Amada, and 4-year-old Amada Lee.

The movie stars are by all accounts AMAZING parents who always put their kids in front of fame and career. But believe it or not, this idyllic family life is NOT how Miz Mendes saw her life unfolding!

In a new interview on Thursday with the Australian radio station Nova 96.9, she told hosts Fitzy and Wippa that prior to falling for the La La Land star, she actually didn’t envision being a mom at all:

“I was lucky enough to work my bum off for 20 years. I never wanted babies before until I fell in love with Ryan, and it kind of worked out to where I was 40 and having my first baby. I think I was 42 for the second one, so it worked out in that way that I had a career and then I changed my focus to my family.”

Awww! Sometimes it just takes meeting the right person to change everything.

However, the 46-year-old would “never want to send the wrong message to young women” and wants to remind everyone that it’s “not an either-or situation” for everyone. Though for her it has been lately. The 46-year-old quipped:

“I just need Ryan Gosling to direct another film, and then hire me.”

ICYMI, her last project was Lost River in 2014, directed by Ryan. Today, she’s “definitely thinking of going back” to acting now that her girls are growing up, but her roles will be a little different:

Earlier this month, Mendes chatted with the Sydney Morning Herald about the possibility of getting back in front of the cameras:

“I feel like, as far as my ambition, it didn’t go away, it just shifted onto the children. I applaud and look up to those women who can do it all, but I’m not one of them — and, thankfully, I have a choice not to work and I realize how fortunate I am that it’s even a choice. I’ve been so happy to be able to incubate with my babies, but now they are four and six, I’m starting to feel like my ambition is coming back.”

She also joked about her current home life with her partner and their daughters:

“Sometimes it feels like we are running some kind of bed-and-breakfast with very drunk and aggressive guests. We really do feel like we are working in a hotel, and the guests are angry and bossy and demand food brought to them. And by the time they go to sleep, we’re left to just clean up and talk about how they’ve treated us that day!”

We hope to hear more from Eva soon — and see her on our screens, too! But we’re so in awe of a movie star who puts family first!

END_OF_DOCUMENT_TOKEN_TO_BE_REPLACED

END_OF_DOCUMENT_TOKEN_TO_BE_REPLACED
We and our partners use cookies on this site to improve our service, perform analytics, personalize advertising, measure advertising performance, and remember website preferences.Ok