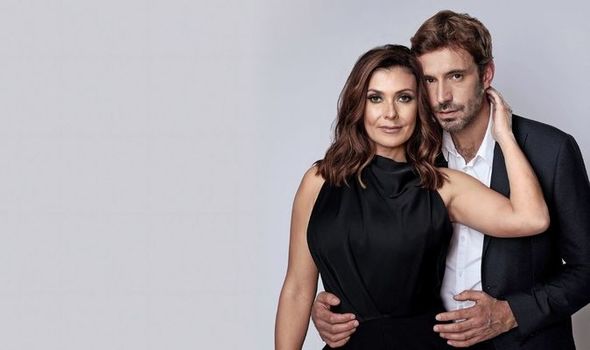 After spending 13 years in Coronation Street, the 45-year-old star, who left the soap two years ago, is busily rehearsing for the part of Alex Forrest, made famous by the captivating actress Glenn Close.

And there are scenes which require her to disrobe…

The mum-of-four, who admits to being terribly self-conscious about her figure, said: “There are going to be racy scenes and I must admit I am very nervous about that.

“It’s a real departure from what I’ve done before and I have to wear some things I probably wouldn’t want to on stage.

“There will be some intimate moments, so I want to make sure that I feel my best.

“When I found out that I had definitely got the role, I signed up for a personal trainer as I’m not in the best shape I’ve been in. I am in the middle of training at the moment and eating well and looking after myself.

“It’s really important that I feel confident doing it, so I’m working hard at the gym and lifting weights to try to get more toned.”

Kym says she is fortunate to have former Corrie actor Oliver Farnworth star opposite her as her married lover.

“He is lovely and we knew each other from before although we never really worked together properly, more that we saw one another in the green room,” she grins.

“I think on set I probably gave him a pint in the Rovers.

“I am definitely going to be giving him more than a pint this time around!”

While Kym has watched the original movie to prepare for the role, she is determined not to ape Glenn Close.

“I think that would be a real mistake,” she declares. “I have re-watched the film but only the once, just to take myself back on that journey, to see where she started and where she went, because that’s a sensible thing to do really.

“You don’t ever want to do something and mirror someone. That would be a mistake. I mean we are talking about Glenn Close here.

“They are huge shoes to fill and I’d never attempt to do so. I do the play my way.”

With the film that famously gave us the term “bunny boiler”, can Kym understand the obsessive nature of her character?

“You mean becoming obsessed with a married man? I can’t relate to that myself and I have never stalked anyone,” she says.

“But when you look back to the 80s, people didn’t really talk about mental health compared to how we do today.

“That’s something I feel we are exploring more in the play – and that’s just because of the era that we’re in.

“It is evident that bad things have happened to her and she’s quite damaged and scarred mentally by those things, which is why she behaves the way she does.”

Kym knows only too well how important it is to voice her feelings and she is currently having talk therapy once a week to combat her anxiety: “It really helps to talk to someone anonymously about what is going on in my head rather than internalising things – it’s certainly nothing to be ashamed of.”

The star took a break from her role as co-host of BBC show Morning Live this year, citing that one of the reasons was to look after her father, who has incurable prostate cancer.

“I wanted to be there for my dad. I needed to support my family and it was absolutely the right thing to do,” she says.

“Life was tough working away in London when my 10-year-old daughter Polly was up North. We really missed one another and that was making things really difficult.

“I’ve been able to be around for dad much more and the cancer has now spread to his bones, which is so hard to take in.

“The anxiety attacks I suffered from in the past have come back with a vengeance.

“I started to avoid going places again, which was a sign for me that I was really down. I would have a panic attack in my car and then I wouldn’t want to get in the car again to drive. I would think ‘this is not OK’.

“So I decided to step back from Morning Live to focus on myself, although recently I have been going in once a week.”

Kym admits that a big part of her recovery has been the support of her husband Scott Ratcliff. She and the 33-year-old Army

Major said their vows in front of family and friends at Sandhurst military academy in October. Kym said: “He is the most incredible man and has helped my family through so much over the past 18 months.”

What is happening where you live? Find out by adding your postcode or visit InYourArea

As well as Kym’s Morning Live and Corrie co-stars attending her wedding – including Jane Danson, Ryan Prescott and Tristan Gemmill – her father was able to leave his mobility scooter to walk her down the aisle.

“It was the most incredible and emotional moment to have my dad do that,”she recalls.

“Ever since I was a little girl, we have been inseparable and he has always called me ‘his shadow’ because I’ve always been at his side.

“It’s a term he has used all my life and it’s so endearing.

“We want to make this Christmas extra special for him, as we don’t know what the future holds. Mum and dad have been married since mum was 17. They have said they want to have Christmas dinner alone and then they will come to our house.”

Kym and Scott started dating in 2018 after they were introduced to each other by Kym’s former Corrie co-star Antony Cotton.

Kym says: “We don’t argue, we’re similar, we laugh at the same things. We’re used to time apart but despite that, we’re as close as we are. I really have met the perfect person.”

Scott popped the question back in June, when the actress-and-singer celebrated her 45th birthday, and Kym was delighted to walk down the aisle with her father.

His cancer has now spread to his pelvis, spine, ribs and left leg, for which he is currently receiving chemotherapy .

“The hope is that they may be able to extend his life, but by how much, nobody really knows, and he is in a lot of pain,” says Kym. She reveals how her dad is now keen to encourage others not to delay being seen to by a doctor.

“But catching it as early as possible can make all the difference.

“Our biggest hope is the treatment keeps working and gives us more time with him.”