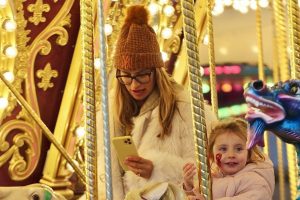 Ferne McCann was spotted enjoying a ride on the carousel horses with her four year old daughter Sunday at Winter Wonderland but she had her eyes glued on her phone.

The 31 year old mum-of-one, who was seen earlier in the day at a film screening, hopped on the vintage ride with her little girl as they enjoyed a wintry and festive day out together at the London Hyde Park event.

Former TOWIE star Ferne was bundled up for the cold weather as she donned a white faux fur jacket and a pair of ripped jeans for the trip out.

Her blonde tresses were loose under a tan knitted New York bobble hat and she also donned her chunky black glasses as she looked intently at something on her device.

Sunday meanwhile was grinning as she whizzed round on the horses sat next to her mum.

The little girl's auburn locks were tied up into a messy ponytail and she had a red design painted onto her cheek in face paint.

Sunday wore a pink puffa jacket and black leggings for the outing.

It comes as the pair were recently seen enjoying a trip to the cinema for a premiere screening of Jack Whitehall's Clifford the Big Red Dog movie.

They appeared to have a fantastic time as they posed laughing and smiling on the red carpet.

The duo even met up with 31 year old Billie Faiers, her husband Greg Shepherd, 36, and their children Nelly, eight, and Arthur, four, along the way.

Ferne was wearing the same outfit to the Leicester Square screening, so it seems she had a whole mum and daughter bonding day planned for her and Sunday on Saturday, with Winter Wonderland to finish off the festivities.

She was also sporting a pink Prada crossbody handbag and matching white and pink trainers.

It comes as Ferne recently showed off her incredible faux Christmas tree for this year.

The ITVBe First Time Mum star decked it head to toe in silver and pink tones and gave fans a glimpse of it in her living room on her Instagram page.

For all your latest updates on Ferne McCann and other reality stars, sign up to OK!'s daily newsletter.