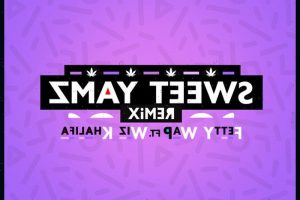 “I really connected with the original song ‘Yamz’ from the first time I heard it earlier this year,” Fetty Wap shared. “It makes me think of one of my favorite cities, Miami. I immediately knew I wanted to flip it and had to do a Zoomix!”

“Sweet Yamz” is a remake of “Yamz” by Masego and Devin Morrison that was released in 2021.

For the remix version, Wiz adds his own flavor to the feel-good number, rapping, “I hit it once, she let me do it again, I got enough fruit for you and your friends, come to my spot, now you know what it is / And then I brought a pound on the jet, now I’m here, just took his girl and he said it ain’t fair / But I’m a gangster, I really don’t care, know how to share, I’m a player/ And I’ma come runnin’, don’t worry.”