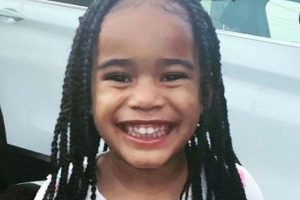 Fetty Wap's daughter Lauren tragically passed away at the age of four from severe complications surrounding a heart defect she had since birth.

And Lauren's cause of death has now been listed as a fatal cardiac arrhythmia from complications of congenital cardiac anomalies, a death certificate obtained from TMZ reveals.

Lauren was born with a cardiac anomaly that leads to cardiac arrhythmia, known commonly as an irregular heartbeat.

Lauren's passing has been listed on June 24 at her Riverdale, Georgia home.

On Monday, Turquoise posted the video on her Instagram account to confirm the news that her daughter Lauren had passed away.

The video showed Lauren smiling in a pool, with the caption: "This is my amazing, beautiful, funny, vibrant, loving, talented, smart and hardheaded princess mermaid Aquarius.

"If you see this post scrolling by with her comment or just say to yourself 'I love you LAUREN' because they say that souls can feel your love #rip," she continued.

Fetty, real name Willie Junior Maxwell II, also paid tribute to his "mini-me", writing in an Instagram caption: "I love you to the moon and back forever and ever bestfriend [sic]."

Fetty has never publicly confirmed how many children he has, but Lauren is believed to be the fifth child of six that he shares with five mothers.

In October of last year, the Grammy-nominated artist also lost his brother Twyshon Depew after he was shot and killed in New Jersey.

He captioned a snap of them together: "I love you lil bro my twin … R.I.P… I failed you bro I'm sorry.

"I keep calling ya phone, and you won't pick tf up and that s**t never ring 3 times now it's straight to vm I love you lil bro I really thought I could get you out before I ever had to make a post like this lil bro like wtf."