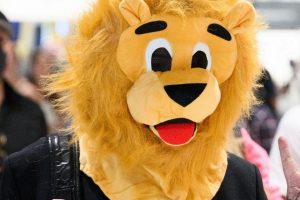 Boy George is the final I'm A Celebrity…Get Me Out Of Here! star to land in Australia as the show's start date draws closer.

The 61 year old star touched down at Brisbane Airport in the early hours of Saturday 29 October, UK-time.

The singer sported a lion mask as he made his way through arrivals and speaking to reporters at the airport, he quipped: "I'm here to a version of The Lion queen, I don't know what you are talking about darling!"

Before getting into his waiting car, he was asked what requests he had made as he now has to isolate for a week and replied: "Lots of green juices."

He declined to comment on his veganism and what that might mean for trials, simply repeating: "I am a lion queen."

Boy George won’t be forced to eat insects in Bushtucker Trials and will be given meat and fish alternatives at camp meals, according to sources on the show.

Earlier this year George was a guest on Ant and Dec’s Saturday Night Take-away and told the duo, who host the reality show, that the idea of eating meat put him off, saying: “Unless you do a vegan version and then I’m in.”

And speaking in 2016 the singer, who is renowned for wearing signature hats, revealed he turned down the survival series several times due to strict campmate uniform and lack of food.

He said: “There would be serious clothing restrictions in the jungle.

“I’d have to get certain hats made and I couldn’t get over the food. I would have a problem with that.”

Their arrival marks the arrival of the final confirmed contestant, who has joined others stars including A Place In The Sun's Scarlette Douglas, former rugby player turned royal Mike Tindall, and England Lioness Jill Scott.

A Place In The Sun's Scarlette arrived in Australia yesterday, telling reporters: "I am not the best with creepy crawlies and I hear they are supersized here so wish me luck with that.

"I am more of a glamper so this is going to be interesting if I was to go camping.

"I am super competitive and I have two older brothers so I have always had to compete for the limelight being the only girl. I am really looking forward to getting stuck in."

Scarlette added that she would miss her mum's cooking but is hoping there is the recipe for romance on the ITV show.

Her arrival was preceded by former rugby player Mike Tindall, who is the show's first royal participant.

Speaking for the first time about signing up, Mike, who helped England win the 2003 Rugby World Cup, told reporters: "It should be good fun, why not? It is always worth a go isn't it."

Told it was the first big reality series a Royal had done since It's A Knockout, he added: "No one said that when I did Bear Grylls and The Jump and I just do things I think will be fun."

Speaking about leaving his family behind, the father-of-three said: "This will probably be the longest time I have been away and then not having communication, that will be the hardest bit.

"But also you get your head around what you are doing and try to win some stars. I want to win stars because I want to eat."