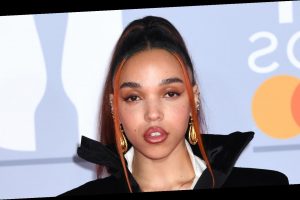 FKA Twigs has revealed that she was “left with PTSD” after her relationship with Shia LaBeouf. The singer appeared on the podcast Grounded with Louis Theroux on Jan. 25, 2020, and spoke about why she felt it was necessary to share her experience with domestic abuse.

In the lawsuit she filed against LaBeouf in December 2020, she alleged that the Transformers actor had put her through “sexual battery, assault and infliction of emotional distress,” according to the New York Times. FKA Twigs, born Tahliah Debrett Barnett, spoke up about these claims in this new interview.

As E! Online reported, Twigs described an “intense honeymoon period” that gave way to “jealous” and “controlling” behavior. She claimed that she wasn’t allowed to “look men in the eye,” and that LaBeouf would berate her if she didn’t meet a “quota” of kisses every day. Her “wake up call” was a life-threatening drive where LaBeouf threatened to crash the car unless she said she loved him. Twigs added that he “ended up basically strangling me in public at a gas station,” which prompted her to call a free helpline.

Twigs apparently now feels that through talking about her story, she can help other victims of abusive relationships. “I just want to change the conversation and the stigma around domestic abuse,” she told Louis Theroux. “I am definitely healed to a point where I can put my experience into something positive to try and help other people. That’s all I want.”

According to E! Online, FKA Twigs and Shia LaBeouf first started dating in 2018. They met as co-stars on the set of the film Honey Boy, which was loosely based on LaBeouf’s life as a child actor.

One of LaBeouf’s previous ex-girlfriends, the stylist Karolyn Pho, also described their relationship as violent and abusive to the New York Times. During one incident, which is outlined in the lawsuit, she alleges that he pinned her to their bed and headbutted her.

LaBeouf responded to these claims in a statement to the Times, where he revealed that he was enrolled in a 12-step sobriety program as well as therapy. The actor claimed that “many of these allegations are not true,” but stated that he “owed” these women the opportunity to be heard. LaBeouf added that he was committed to recovering from his alcoholism, and “will forever be sorry to the people that I may have harmed along the way.”

Twigs was previously engaged to actor Robert Pattinson before they split in 2017, as NME reported. In her interview with Louis Theroux, she also spoke about the racial abuse she faced while dating the Twilight star, often from his devoted fans. Twigs explained the “bullying” by saying that Pattinson was their “white Prince Charming,” so fans thought that he “should be with someone white and blonde.” Twigs told Theroux, “I’m not trying to deny my history, I just think it’s important that I’m not defined by it, because he doesn’t have to be defined by it.”

If you or someone you know is dealing with domestic abuse, you can call the National Domestic Violence Hotline at 1−800−799−7233 or TTY 1−800−787−3224. You can also find more information, resources, and support at www.thehotline.org.