Home » Celebrities » Forget Sex And The City 3 – HBO Max Is Bringing Back The Show!!!

Forget Sex And The City 3 – HBO Max Is Bringing Back The Show!!! 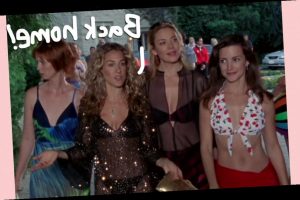 As much as we loved seeing the ladies of Sex and the City again in their big screen efforts, it wasn’t exactly the perfect fit — especially in that second movie.

No, the real home for Carrie, Miranda, Charlotte, and Samantha (back to that in a moment!) was always the small screen, in clever, edgy half-hour blocks on HBO. And you know who agrees? HBO!

Yes, according to a new report in Page Six, the content-hungry HBO Max streaming service is looking to revive the series! So instead of the long-awaited Sex and the City 3, we’d get Season 7! Yasss!

Back in September Sarah Jessica Parker herself floated the idea of doing “some episodes of Sex and the City” in an interview with Entertainment Tonight, saying:

“I’d like to see where all of them are. I’m curious, the world has changed even since the movie… technology and social media… sexual politics and the #MeToo movement and Time’s Up… I think Carrie Bradshaw would just be so greedy to share her feelings and thoughts.”

But that’s more than idle chat now! Page Six now says “a well-placed industry insider” has confirmed a limited series is in the works! The “revisit” as SJP branded it, would bring back the entire original cast — with the exception, of course, of Kim Cattrall, who has turned her back on the franchise forever.

In fact, the 64-year-old just defended her decision on Wednesday while speaking on the Women’s Prize For Fiction Podcast. In addition to revealing she believed she was forced to choose between the show and her last chance to get pregnant, she also spoke about the fan reaction to her refusal to return for SATC 3:

But Kim wasn’t going to be forced to do something she felt was in her past. She said:

“I am lucky enough to have a choice… And it’s, it’s something that I feel very lucky to have. And I’m very protective of it. But I wouldn’t be any good doing something that I really didn’t want to do.”

It’s true. Better she bow out than sleepwalk through it like some stars of major franchises who don’t seem to want to be there…

Are YOU still excited for the return of SATC without Samantha??

END_OF_DOCUMENT_TOKEN_TO_BE_REPLACED

END_OF_DOCUMENT_TOKEN_TO_BE_REPLACED
We and our partners use cookies on this site to improve our service, perform analytics, personalize advertising, measure advertising performance, and remember website preferences.Ok