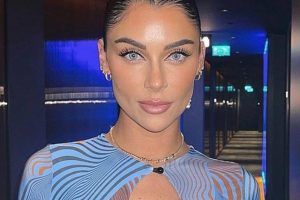 The 31 year old, who appeared in the ITV2 series in 2015, revealed her new partner as she posted photos of them together holding hands, with the caption: “Fate knew something that we didn’t”.

An insider has said that Cally believes she's “found the one” with former SAS contestant DJ, 35, who appeared as "Number 9" in the 2021 series.

A pal exclusively told OK!: “They met years ago and maintained a friendship, however over the last few months spent a lot of time together and fell in love fairly quickly.

“He has everything Cally ever wanted in a man and she's convinced she’s found the one.”

Cally shares a daughter with ex-Love Islander Luis Morrison, whom she met on the show, becoming the first contestants from the series to have a child in 2017.

DJ, has two children, and said last year upon joining SAS: Who Dares Wins: “I have two children who, at 14 and 11, are at the age where they require a role model.

“I wanted to show them that you can step back and do something that you won’t necessarily succeed in.”

It was revealed last year, that DJ, who hails from Bedford, was in the middle of a divorce from his ex-wife of 13 years.

Following the split, the SAS star swapped his career in banking to become a hair salon owner.

DJ owns ShortCuts hair salons, dedicated to cutting childrens’ hair, and has branches open across the country, in such places as Milton Keynes, Northampton and Leeds.

The Channel 4 star appeared smitten on Instagram last year with his girlfriend at the time Alex, who is noted as an advanced aesthetics practitioner.

Having moved on from their past relationships, both Cally and DJ look happy after going Instagram official with each other.

Cally’s celebrity friends shared their support of the new romance, following the couple’s latest photo in the comment section.

Stephanie Davis wrote: “So happy for you beautiful. You deserve the world xx”, to which Cally responded: “Thanks my girl.”